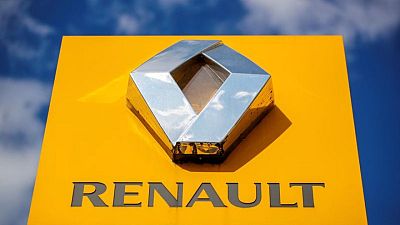 PARIS – French carmaker Renault expects to produce at least 300,000 fewer vehicles this year due to the global shortage of semiconductor chips, three sources close to the firm told Reuters on Wednesday, a much bigger hit than previously estimated.

The shortage of chips, used in everything from brake sensors to power steering to entertainment systems, has led automakers around the world to curtail or even suspend production, pushing up the prices of vehicles.

The supply problems would cost Renault, which is set to publish its third-quarter sales on Friday, over a third more than the 220,000 lost vehicles it forecast in early September.

The company’s Paris-listed shares were down around 4% by 1347 GMT, while shares in European rivals Volkswagen, BMW and Stellantis, all of which have also been forced to cut production, were down between 1% and 4%.

“The forecasts change all the time, but the shortfall will be between 300,000 and 400,00 vehicles,” said one of the sources. That would represent at least 8% of the 3.75 million vehicles Renault sold in pre-pandemic 2019.

Stifel analyst Pierre-Yves Quemener said it would be an “achievement” if the shortfall could be limited to 350,000 vehicles.

“This would imply that they would improve the situation significantly in the fourth quarter, which seems to me very, very ambitious,” he said.

The chip crunch has come at the worst possible time, automotive lobby group PFA said on Tuesday, as carmakers recover from coronavirus disruptions and shift towards producing all-electric vehicles.

It said that chip supply constraints could stretch well into 2022.

Electronics firms in Malaysia, central to global chip supplies, said customers that sell chips to auto and electronics manufacturers want to lock in longer-term deals and are happy to pay more if need be https://www.reuters.com/technology/theyll-have-pay-malaysia-chip-crunch-triggers-new-era-supply-deals-2021-10-20.

Renault has said that electric vehicles would account for up to 90% of its Renault brand sales by 2030.

All cars manufactured in the European Union this year must comply with EU regulations that cap average CO2 emissions from new cars at 95g CO2/km, or face heavy fines.