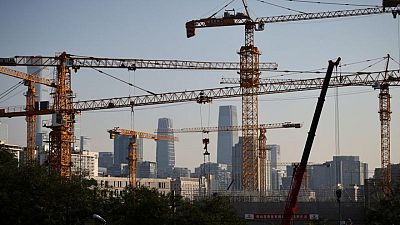 By Gabriel Crossley and Kevin Yao

BEIJING – As China raced ahead of major rival economies from the COVID-19 induced slump last year, Beijing saw a chance to push through tough measures targeting debt-ridden developers as well as industrial polluters and tech giants.

But slowing momentum in the world’s second-largest economy underscores the risks and poses a test to Xi’s resolve to implement his plans.

Growth in the third quarter has slipped to an annual 4.9%, the slowest in a year. However, policymakers are unlikely to waver much in their attempts to address what they see as long-term risks and distortions in the economy, analysts say.

Industrial production was dampened by energy intensity targets as well as by power curbs amid coal shortages, exacerbated by mine closures and safety inspections. China’s “zero tolerance” COVID-19 strategy has also weighed on consumption.

Such government policies may have cut quarterly growth by 0.7 percentage points, said Nie Wen, a Shanghai-based economist at Hwabao Trust.

Chinese leaders vowed last December to use the window created by the economic recovery to focus on structural reforms. Setting a more modest and flexible growth target of “above 6%” for this year also gave them plenty of room for manoeuvre, with many analysts expecting around 8% growth in 2021 despite the slowdown.

Amid Xi’s push to create what he calls “common prosperity”, regulatory crackdowns targeting tech, education and entertainment have disrupted the vast online sector and devastated the for-profit tutoring industry, raising questions over the role of the private sector in China’s economy.

Beijing is projecting confidence and has not signalled any major policy shifts to address the slowdown. Premier Li Keqiang said last week that China has ample tools to cope with economic challenges.

Policymakers, fearful that a property bubble could undermine the country’s long-term ascent, are likely to continue to curb rampant borrowing and speculation but could soften some tactics, policy sources and analysts have told Reuters.

“It will take much more damage to financial markets and the real economy before Beijing would be willing to unwind some of those curbs,” said analysts at Nomura in a note.

One reassuring factor for Beijing may be that employment figures have continued to improve even as house building and factory activity slow, with the nationwide urban jobless rate falling to 4.9% in September, the lowest since 2018.

Analysts warn, however, that China’s employment figures do not effectively capture the numbers of jobless rural migrant workers or those who have given up looking for jobs.

A healthy looking labour market helps the government tolerate the slowdown, although some workers may be “underemployed” as factories suspend production, said Zhang Zhiwei, chief economist at Pinpoint Asset Management.

In another bright spot, exports have also beaten expectations for months as global demand for Chinese goods helps to provide a buffer against domestic woes.

Net exports contributed nearly 20% of China’s overall growth in the third quarter, more than double that of the previous three months.

“China has been lucky this year as exports continued to exceed expectations and support growth. How long this can be sustained is hard to forecast,” Zhang said.

A relaxation in COVID-19 controls to help boost consumption is not likely any time soon. After four local cases were reported in recent days in Erenhot, a city in northern China, vehicles without official clearance were banned from leaving, and cinemas and gyms were closed.

While an industry body said power woes may ease in the fourth quarter, after a raft of measures to boost coal supplies including calls for closed mines to resume production, analysts warn the crunch could last till next year.