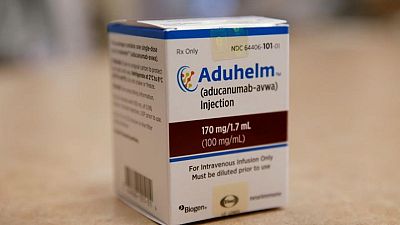 By Dania Nadeem and Amruta Khandekar

– Biogen Inc’s Alzheimer’s drug will be of little help to its third-quarter sales, Wall Street analysts said, as the drugmaker faces an uphill task of convincing hospitals and clinics to use the $56,000-a-year treatment and insurers to reimburse it.

Aduhelm in June became the first new treatment for the memory-robbing disease in nearly 20 years, boosting hopes the treatment would cushion the blow of diving sales of Biogen’s mainstay multiple sclerosis drug, Tecfidera, due to rising competition.

But the acceptance of Aduhelm has been limited due to doubts about its net benefit to patients as well as uncertainty about reimbursement from Medicare, the U.S. government health plan for people over age 65.

“We expect focus will remain Aduhelm’s launch, where signals around initial sales, reimbursement and prescriber sentiment have been negative, and shares have reflected this, taking a round trip nearly all the way back from pre-approval levels,” said Baird analyst Brian Skorney.

Insurers and hospitals now await coverage terms from the U.S. Centers for Medicare & Medicaid Services before covering the drug, which is administered through an infusion.

** The CMS will give its initial decision on whether it will cover the Adulhelm’s cost in January 2022, with a final decision expected in April.

** In June, U.S. regulators approved Biogen’s aducanumab as the first treatment to attack a likely cause of Alzheimer’s disease despite controversy over whether the clinical evidence proves the drug works.

** Last month, U.S. lawmakers sought information from the U.S. Food and Drug Administration related to its accelerated approval of Aduhelm, ratcheting up the pressure on the agency that has come under fire for clearing the drug.

** Biogen is expected to report revenue of $2.67 billion when it reports third-quarter results on Oct. 20, according to the mean estimate from 25 analysts, based on Refinitiv data​

** The mean estimate for Aduhelm sales is $12.01 million, according to 17 analysts