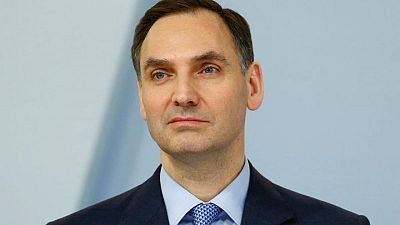 BERLIN -Deutsche Bank sees the logic that there should be consolidation in the European banking sector and the task in hand is to prepare for that outcome, Chief Financial Officer James von Moltke said on Thursday.

Hewing closely to the German bank’s standard line on potential mergers, von Moltke told a financial conference hosted by BofA Securities that it should first complete a strategic overhaul before contemplating major deals.

“We see the industry logic that there should be consolidation in European banking,” he said in response to a question.

“It’s something that we see in the future for our company… Our focus on transformation is what we need to do to prepare for that eventuality.”

Deutsche Bank has been repeatedly linked to a possible tie-up with a leading Swiss bank, but Chief Executive Christian Sewing has consistently said that a turnaround plan he launched in 2019 should first bear fruit.

The bank last year posted its first full-year profit since 2014 and got a lift last month from a ratings upgrade by Moody’s.

Von Moltke said that Deutsche’s four business units – asset management and its private, corporate and investment banks – were performing at or ahead of plan. That put it on track to hit a goal of generating revenue of 25 billion euros ($29.3 billion) or more in revenue next year. [L8N2QP1WT]

Commenting on a U.S. investigation into asset management arm DWS’s use of sustainable investment criteria, von Moltke said that it “stands by its disclosures”.

“We will have to go through the process of those investigations,” he said, adding that he did not see the probe having a measurable impact on Deutsche’s third-quarter results.