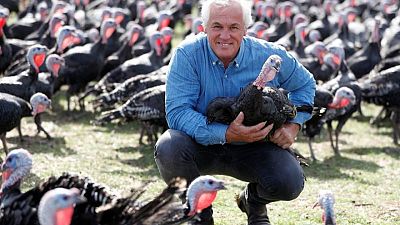 Kelly, who hatches 2 million of his own breed KellyBronze birds a year, accounting for 27% of all turkeys sold at Christmas, said CO2 was used in the slaughter process and more importantly to keep the product fresh.

“Carbon dioxide is used to extend shelf life, so when you put a turkey in a bag, you suck the air out and you blow carbon dioxide in and that stops the bugs growing, “ he said.

“We can’t create millions and millions of turkeys all in the week before Christmas, it has to be spread over a few weeks so if (CO2 production) really wasn’t back up and running, it would be another car crash.”

The shortage of CO2 will hit meat processing in a matter of days if supplies do not come back online, the industry has warned, which would the make the alternatives of a joint of beef or a goose also hard to find.

A gin and tonic could also be off the menu, with the carbonated drinks industry facing the same issue.

Later on Tuesday, Britain struck a deal with CF Industries for the U.S. company to restart the production of CO2. The gas is a byproduct of the fertiliser it produces at two plants in northern England and the company had halted operations due to the soaring price of gas.

The news will come as a relief to Kelly, who said the problem could be solved pretty quickly.

“The production facilities are there, it’s just about turning it on again, and paying the gas bill,” he said.