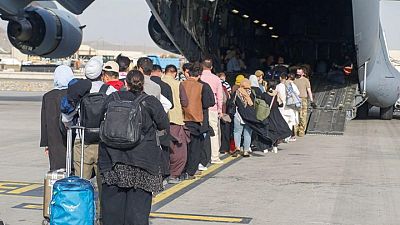 – Afghanistan’s economy could shrink by as much as 20% this year and its currency may slide further than it already has following the Taliban’s takeover, Fitch Solutions said on Friday.

The Taliban seized power last weekend from a U.S.-backed government, sending thousands fleeing and potentially heralding a return to the militants’ austere and autocratic rule of two decades ago.

“It is likely that the economy will contract sharply this year,” Anwita Basu, head of Asia Country Risk at Fitch Solutions – the analysis and research arm of Fitch Group – told Reuters.

“Countries facing similar circumstances like Myanmar and Syria have seen their GDPs collapse by around 10-20%, which can’t be ruled out for Afghanistan too.”

Basu said foreign grants and aid, a major source of Afghanistan’s funding, will dry up significantly this year if not beyond.

“Already some figures from the UN (United Nations) suggest that aid would have fallen by at least 20% from 2020 levels in 2021 following the U.S. departure but that did not account for the Taliban’s takeover in this rapid way”, she said in emailed comments.

Basu said Afghanistan’s currency, the afghani, which has already weakened more than 7% this month against the U.S. dollar, may fall more because most of the state’s foreign-held assets have been frozen to stop the Taliban from gaining access. She added that hyper-inflation cannot be ruled out.

Afghanistan’s fragile health system has been damaged by decades of war. The country’s prospects for obtaining COVID-19 vaccines were always poor but now the situation has become “bleak”, according to Basu.

The Taliban’s takeover was not only causing concern over Afghanistan’s future but also about the impact on other countries in the region and their economies.

Rating agency Moody’s Investors Service has warned of geopolitical and economic risks for the region.

“For its neighbours, the immediate risk to credit profiles from the political uncertainty in Afghanistan relates to a potentially large inflow of refugees,” Moody’s said on Monday, adding that Pakistan may see the largest influx of refugees.

Mining prospects may attract major powers like China to secure resources for its green economy push, but difficult access and lack of roads complicate extraction.

Some U.N. and U.S. officials worry Afghanistan’s chaos is creating conditions for even higher illicit opiate production, a potential boon to the Taliban. U.N. officials reported that the Taliban likely earned more than $400 million between 2018 and 2019 from the drug trade.

“The Taliban will not be impoverished – a U.N. report has estimated that they earn up to $1.6 billion annually, most of it through illegal channels, which they could very well institutionalize,” Basu told Reuters.