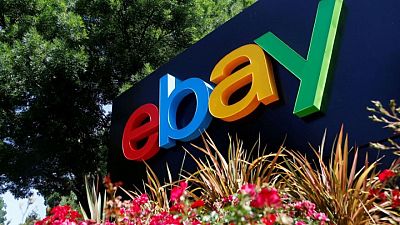 -EBay Inc on Wednesday forecast current quarter revenue below analysts’ estimates, signaling that reopening economies and vaccine rollouts could be putting an end to the pandemic-led shopping boom.

In the past year, customers turned to e-commerce platforms during the coronavirus pandemic as they were home-bound for months at a stretch, but vaccine rollouts are expected to lead a return to brick-and-mortar shopping as more people step out of their homes.

EBay said it expects third-quarter revenue in the range of $2.42 billion to $2.47 billion, while analysts were expecting $2.92 billion, according to IBES data from Refinitiv.

Shares of the e-commerce firm fell 1% after the bell.

Jamie Iannone, eBay’s chief executive, said an increase in people on the move in the spring had impacted sales, but the company’s playbook in areas such as collectibles, ads and payments was working.

“We feel like we’re coming out of the pandemic stronger than we came into it,” he said in an interview.

He said that excluding eBay’s deal to sell 80% of its Korea business to Shinsegae Group’s E-Mart Inc, the company met or exceeded forecasts.

EBay said its second-quarter revenue rose about 14% to $2.68 billion, its slowest growth in four quarters. Analysts expected sales of $3.00 billion.

The company’s gross merchandise volume (GMV), which is the value of goods sold on its websites within a certain time frame, fell 7% to $22.1 billion.

The company expects to see an additional drop in active buyers on a rolling 12-month basis, but an increase in GMV per buyer in the coming quarters, Chief Financial Officer Stephen Priest said on a post-earnings call.

On an adjusted basis, the company earned 99 cents per share, above analysts’ estimate of 95 cents.

EBay has also expanded its share buyback program by $3 billion.