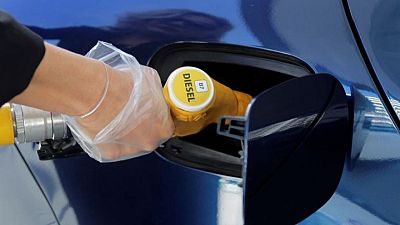 <div> <p>By Nia Williams</p> <p><span class="caps">CALGARY</span>, Alberta -Oil prices firmed on Monday, with Brent trading near $70 a barrel on growing optimism that fuel demand will grow in the next quarter, while investors looked ahead to see how producers will respond at this week’s <span class="caps">OPEC</span>+ meeting.</p> <p>Trading was thin as U.S. and UK markets were closed on Monday due to public holidays. Brent crude futures settled up 60 cents, or 0.9%, at $69.32 a barrel, off the a session high of $69.82. U.S. West Texas Intermediate crude rose 0.9% and last traded at $66.91 a barrel. Both contracts were set for a second monthly gain.</p> <p>Analysts expect oil demand growth to outstrip supply despite the possible return of Iranian crude and condensate exports.</p> <p>“Despite the mobility restrictions that are still in place, oil demand is recovering dynamically around the world,” Commerzbank said. </p> <p>Iran has been in talks with world powers since April, working on steps that Tehran and Washington must take on sanctions and nuclear activities to return to full compliance with the 2015 nuclear pact.</p> <p>The Organization of the Petroleum Exporting Countries and allies including Russia will meet on Tuesday.</p> <p>The group known as <span class="caps">OPEC</span>+ is expected to stay the course on plans to gradually ease supply cuts until July.</p> <p>“Trading excitement often drives the market just before <span class="caps">OPEC</span>+ meetings, and there is confidence that the oil producer group will demonstrate supply restraint at its meeting on Tuesday,” Louise Dickson, oil markets analyst at Rystad Energy said in a note to clients.</p> <p>A Joint Technical Committee (<span class="caps">JTC</span>) for the alliance kept its global oil demand growth forecast for 2021 unchanged at about 6 million barrels per day, two sources from the group told Reuters on Monday.</p> <p>Separately, crude output in the United States soared 14.3% in March, the Energy Information Administration reported on Friday, while Baker Hughes data showed the number of oil and gas rigs in operation rose for a 10th month in a row last week.</p> </div>