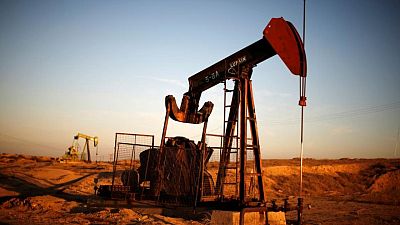 <div> <p>By Stephanie Kelly</p> <p><span class="caps">NEW</span> <span class="caps">YORK</span> -Oil prices rose 1% on Thursday, bolstered by strong U.S. economic data that offset investors’ concerns about the potential for a rise in Iranian supplies. </p> <p>Brent rose 59 cents, 0.9%, to settle at $69.46 a barrel. U.S. West Texas Intermediate (<span class="caps">WTI</span>) crude rose 64 cents, or 1%, to settle at $66.85 a barrel.</p> <p>The number of Americans filing new claims for unemployment benefits dropped more than expected last week, according to data from the U.S. Labor Department.</p> <p>The U.S. economy, which in the first quarter notched its second-fastest growth pace since the third quarter of 2003, is gathering momentum, with other data on Thursday showing business spending on equipment accelerated in April.</p> <p>“That’s given us more of a risk-on attitude about the markets,” said Phil Flynn, senior analyst at Price Futures Group in Chicago. “We’re back to focusing on supply and demand.”</p> <p>The prospect of Iranian supplies re-entering the market has pressured prices. Iran and global powers have been negotiating since April about Washington lifting sanctions on Iran, including its energy sector, in return for Iranian compliance with restrictions on its nuclear work.</p> <p>Those talks will be a major issue for a June 1 meeting of the Organization of the Petroleum Exporting Countries and allies, a group known as <span class="caps">OPEC</span>+. The group is likely to continue gradually easing oil supply curbs at a meeting on Tuesday, <span class="caps">OPEC</span> sources said, as producers balance expectations of a recovery in demand against a possible increase in Iranian supply.</p> <p>Analysts said any increase in supply from Iran would be gradual, with JP Morgan estimating Iran could add 500,000 barrels per day (bpd) by the end of this year and a further 500,000 bpd by August 2022.</p> <p>Concerns also remain about demand in India, the world’s third-largest oil consumer. India has been hard-hit by the coronavirus, and only about 3% of its population has been fully vaccinated, according to the Reuters vaccine tracker https://graphics.reuters.com/world-coronavirus-tracker-and-maps/vaccination-rollout-and-access.</p> </div>