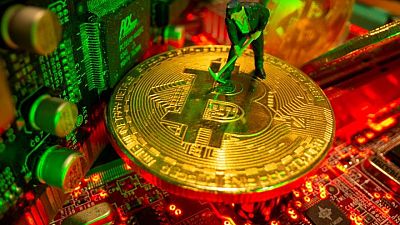 <p><body> <p>By Samuel Shen and Alun John</p> <p><span class="caps">SHANGHAI</span>/HONG <span class="caps">KONG</span> (Reuters) -A crackdown by Beijing is rapidly accelerating a shift in focus by makers of machines that ‘mine’ cryptocurrencies like bitcoin from China to North America and Central Asia as Chinese clients face an uncertain future.</p> <p>China’s central government vowed to clamp down on bitcoin mining and trading on Friday, causing some miners to halt all or part of their operations in a country that accounts for more than half of the world’s crypto supply.</p> <p>The makers of the equipment miners use, many of them Chinese, say they are now looking elsewhere for growth.</p> <p>Hangzhou-based Ebang International said that its “mining machines will still be in short supply” overseas, even if domestic sales disappear. </p> <p>The impact will be further softened by the fact that “domestic customers will go overseas to mine”, it added in a statement sent to Reuters.</p> <p>Illustrating the trend, Shenzhen-headquartered <span class="caps">BIT</span> Mining Ltd said in a statement on Monday that it had entered into a deal with a Kazakhstan-based company to jointly invest in a crypto mining data centre in the central Asian country.</p> <p>Bitcoin miners use increasingly powerful, specially-designed computer equipment, known as “rigs”, to verify bitcoin transactions in a process which produces newly minted bitcoins.</p> <p>The energy-hungry business is big in China, although the country’s market share had been declining for years due to regulatory uncertainty. </p> <p>If China quickly loses its crypto computing power, foreign miners will benefit, Alex Ao, vice president of Innosilicon Technology, a chip-designer and crypto mining rig maker, said. </p> <p>“Places like North America and Central Asia have advantages in terms of power supply and policy support,” Ao said, adding that more Chinese miners will shift abroad. </p> <p>Edward Lu, senior vice president of Canaan Inc, another Chinese maker of mining machines, said it was looking at similar markets.</p> <p>“The strategy should be to strenuously develop markets such as Kazakhstan, Canada, and North Europe, where energy resources are abundant and cheap, while regulations are clear and predictable,” Lu told Reuters. </p> <p>‘<span class="caps">HOSTING</span> <span class="caps">HOTELS</span>’</p> <p>Although China’s northern region of Inner Mongolia, a major mining centre, published draft rules on Tuesday to root out the business, other major mining centres have yet to issue their own, after last week’s salvo from a State Council committee led by Chinese Vice Premier Liu He.</p> <p>“Relocating their mining operations to overseas is the miners’ only Plan B,” Winston Ma, <span class="caps">NYU</span> Law School adjunct professor, said, adding that only China’s biggest mining operators can make the exodus smoothly. </p> <p>Kazhakstan, which clarified its crypto mining rules last year, hopes it will boost an oil-dominated economy.</p> <p>“We received inquiries from three Chinese bitcoin miners on Monday about using our hosting services,” said Didar Bekbauov co-founder of Kazakhstan based Hive Mining, which provides ‘hosting hotels’ for mining machines. </p> <p>Bekbauov said it appeared they were looking for an alternative after the crackdown. </p> <p>Some miners are angry at having to move. </p> <p>“As long as the mining business is not illegal, you should not kill the industry with just a few words from officials,” one Chinese crypto player, who declined to be identified, said. </p> <p> (Reporting by Samuel Shen in Shanghai and Alun John in Hong Kong; Editing by Sumeet Chatterjee and Alexander Smith)</p> </body></p>