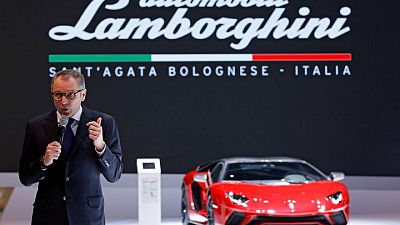 <p><body> <p>(Reuters) -Volkswagen has received a 7.5 billion euro ($9.2 billion) offer for Lamborghini, British weekly magazine Autocar reported on Tuesday, though VW’s Audi said the supercar brand was not for sale.</p> <p>The non-binding offer sets out terms for the purchase of Automobili Lamborghini by Switzerland’s Quantum Group AG, which has formed a consortium with London-based investment firm Centricus Asset Management, Autocar reported. (https://bit.ly/3hSmxhW)</p> <p>The report, citing offer documents, also said that the consortium would include job assurances for existing Lamborghini employees for up to five years and the creation of 850 new jobs.</p> <p>Quantum Group founding partner Rea Stark is also co-founder of Piech Automobile with Toni Piech, the son of former Volkswagen Chairman Ferdinand Piech, according to its website https://www.quantumgroup.ch/imprint.</p> <p>The reported offer for Lamborghini comes amid uncertainty over whether Volkswagen will keep a sprawling structure that also includes brands such as Ducati, Audi, Porsche and Bugatti.</p> <p>Volkswagen confirmed that there was agreement in the group that Lamborghini, which has been named repeatedly as a possible divestment candidate in the past, will remain part of Volkswagen.</p> <p>Asked to comment on the Autocar report, a spokesman for Volkswagen unit Audi, which is in charge of Lamborghini, said: “This is not the subject of any discussion within the group. No, Lamborghini is not for sale.”</p> <p>Representatives of Centricus and Quantum Group were not immediately available for comment.</p> <p>Sources told Reuters in October that Volkswagen had drawn up plans to carve out Lamborghini to make it a more independent business within its stable of car brands and facilitate a potential initial public offering (<span class="caps">IPO</span>) at a later stage.</p> <p>Lamborghini <span class="caps">CEO</span> Stephan Winkelmann last week said the brand planned to invest $1.5 billion to produce an entirely gas-electric hybrid line-up by 2024, adding that its first fully electric model will not appear until the second half of the decade.</p> <p>($1 = 0.8165 euros)</p> <p> (Reporting by Ankur Banerjee, Jan Schwartz, Pamela Barbaglia, John Revill and Christoph Steitz; Editing by Emma Thomasson and David Goodman)</p> </body></p>