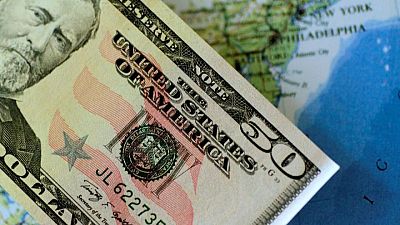 <p><body> <p>By Saqib Iqbal Ahmed</p> <p><span class="caps">NEW</span> <span class="caps">YORK</span> (Reuters) – A dovish Federal Reserve and accelerating growth abroad are weighing on the dollar, a move that could be a boon for stocks and other assets. </p> <p>The U.S. Dollar Currency Index is down 4% from its 2021 peak, making the greenback the worst performer of the world’s major currencies so far this quarter. By contrast, the euro is up 4% against the dollar, the Brazilian real has risen 6% and the Chinese yuan by about 3%. </p> <p>Net bets against the dollar in futures markets have grown for five straight weeks and stand at $15.86 billion, the highest level since early March. </p> <p>“Part of what we are seeing is the top of the first innings of global portfolio flows rebalancing away from the dollar,” said Lisa Shalett, chief investment officer at Morgan Stanley Wealth Management.</p> <p>Several factors are weighing on the dollar. Some investors view the Federal Reserve’s insistence that it will not taper its bond-buying operations anytime soon even as inflation heats up as a double whammy that is denting the dollar’s appeal. Some quantitative easing policies are tantamount to printing dollars, while inflation erodes the currency’s buying power. </p> <p>“The 800-pound gorilla in the room is that there is going to be rising concern that the Fed is behind the curve in addressing inflation,” said Chuck Lieberman, chief investment officer of Advisor Capital Management.</p> <p>While the Fed has reiterated its dovish stance, some countries – including Brazil, Russia and Turkey -have hiked rates, increasing their currencies’ attractiveness to yield-seeking investors. </p> <p>In the United States, the 10-year Treasury yield has declined by about 17 basis points from its 2021 peak. </p> <p>Expectations that U.S. growth may peak while the rebound in Europe and other regions is only beginning are also hurting the dollar, investors said.</p> <p>After contracting in the first quarter, the eurozone’s gross domestic product is expected to accelerate later in the year and increase by 9.2% on an annualized basis in the third quarter, according to a forecast from Oxford Economics. The firm expects U.S. <span class="caps">GDP</span> to peak at a growth rate of 13.3% in the second quarter. </p> <p>Morgan Stanley’s Shalett believes the euro, British pound and Chinese renminbi will benefit most as the dollar weakens. </p> <p>Because of the dollar’s global dominance, its fluctuations often reverberate through a wide range of assets.</p> <p>Raw materials are priced in dollars and become more affordable to foreign investors when the greenback declines. The S&P/Goldman Sachs Commodity Index is down around 3% from its recent peaks on pullbacks in the prices of copper, oil, and other raw materials that have surged this year. </p> <p>A weaker dollar also tends to be a welcome development for U.S. multinationals, making it more favorable for them to change foreign earnings back into their home currency. </p> <p>Companies in the technology sector are among the most exposed to currency fluctuations, with nearly 54% of total revenues in the category coming from overseas, an analysis of Russell 1000 companies by Bespoke Investment Group showed. That is followed by the materials sector, where almost 48% of total revenues come from abroad.</p> <p>Signs that inflation pressures may be forcing the Fed to soften its position on interest rates could help reverse the dollar’s decline. </p> <p>A “number” of Fed officials appeared ready to consider changes to monetary policy based on a continued strong economic recovery, according to minutes of the U.S. central bank’s April meeting. That month’s anemic job number, however, may have dimmed their view. (nL2N2N628K)</p> <p>“We are concerned about a scenario of U.S. overheating, which could lead to inflation well above what the Fed would tolerate,” analysts at BoFA Global Research wrote. “This could indeed surprise markets in our view, and lead to a meaningful move of the (dollar) higher.”</p> <p>A pullback in stocks could also lift the dollar, a popular destination during times of market turbulence. </p> <p>Paresh Upadhyaya, director of currency strategy and portfolio manager for Amundi Pioneer Asset Management, thinks such risks may be keeping some investors from betting on further dollar weakness. </p> <p>Nevertheless, he believes accelerating global growth will continue lifting the Australian, New Zealand and Canadian dollars at the greenback’s expense.</p> <p>“The fundamentals for the dollar remain bearish,” he said. </p> <p/> <p> (Reporting by Saqib Iqbal Ahmed; Editing by Ira Iosebashvili and Dan Grebler)</p> </body></p>