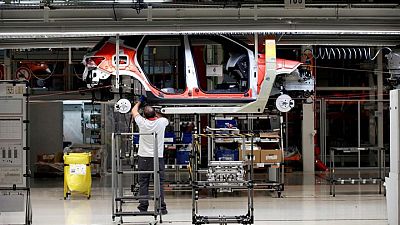 <p><body> <p>By Joan Faus</p> <p><span class="caps">BARCELONA</span>, May 25 (Reuters) – </p> <p>Volkswagen’s <span class="caps">VOWG</span>_p.DE Spanish brand <span class="caps">SEAT</span> has maintained broadly stable production despite the global shortage of semiconductor chips affecting the auto industry, its chairman Wayne Griffiths said on Tuesday.</p> <p/> <p>However, he said production at the <span class="caps">SEAT</span> plant near Barcelona would continue in August when it typically stops for four weeks of summer holidays to recover production lost in the first half.</p> <p/> <p>“The lack of semiconductor (chips) is still a challenge but we are managing it well … What’s most important is to have a good demand for our products,” he told a news briefing, calling the supply problems an occasional issue that should be fixed over time.</p> <p/> <p>Griffiths said <span class="caps">SEAT</span> had just lifted the furlough scheme it initiated in March because of the chip shortage.</p> <p/> <p>In additional to keeping the Barcelona plant open in August, he said the carmaker wants to increase production at one of its assembly lines from the end of May until July provided there are sufficient chips as it strives to meet increasing demand for its models Leon and Formentor. The latter is sold under its associated sports brand <span class="caps">CUPRA</span>.</p> <p/> <p>Griffiths’ upbeat comments contrast those made by VW head Herbert Diess, who in early May said the German carmaker was in “crisis mode” over an ongoing lack of chips and that the impact of the shortage would intensify and hit profits in the second quarter. (Full Story)</p> </body></p>