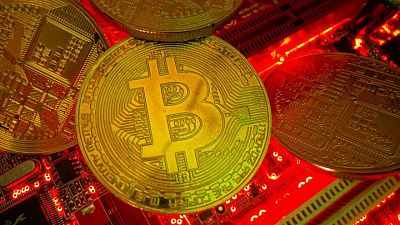 <p><body> <p>By Tom Wilson, Tom Westbrook and Stephen Culp</p> <p><span class="caps">NEW</span> <span class="caps">YORK</span> (Reuters) -Bitcoin jumped more than 10% during a surge in cryptocurrencies Monday, regaining some ground lost during a weekend sell-off that was sparked by renewed signs of a Chinese crackdown on the emerging sector. </p> <p>Bitcoin, the world’s largest cryptocurrency, was last up 12% at approximately $39,400, erasing losses of 7.5% from a day earlier but still down by more than 40% from last month’s record high.</p> <p>Second-largest cryptocurrency ether jumped nearly 19% to $2,491 after slumping more than 8% on Sunday to near a two-month low. It too has fallen by almost half from a peak hit earlier this month.</p> <p>Bitcoin added to its gains late on Monday following tweets from billionaire Elon Musk that appeared to soften his stance against the environmental impact of the cryptocurrency. Musk said on May 12 that Tesla will no longer accept bitcoin due to its consumption of fossil fuels during the mining process. </p> <p>“Spoke with North American Bitcoin miners. They committed to publish current & planned renewable usage & to ask miners WW to do so. Potentially promising,” Musk wrote. </p> <p>In the past week policymakers have stepped up their response to the popularity – and volatility – of cryptocurrencies. On Monday, Federal Reserve Governor Lael Brainard told a virtual conference organized by CoinDesk that the growth in “private money,” digital payments and steps by other central banks were sharpening the focus on Central Bank Digital Currencies, or <span class="caps">CBDC</span>.</p> <p>While her comments did not cause much of a price move, she did say that the wide use of private money poses consumer and stability risks given possible “run-like behavior.”</p> <p>Her comments were echoed later in the day by Atlanta Fed President Raphael Bostic.</p> <p>“It is moving fast. The crypto space in particular right now if you characterized it – it is an extremely volatile market and I don’t think its characteristics right now are conducive for them to be currency,” he said.</p> <p>But Paul Nolte, portfolio manager at Kingsview Asset Management in Chicago, said: “What we’re seeing is an evolution from being an outlaw currency to something that could become potentially more mainstream. In order for it to become mainstream, there’s going to have to be rules and regulations around that,” he said, “and that is what is creating the short-term volatility in all of the cryptocurrencies.”</p> <p>Bitcoin is up approximately 35% this year but down nearly 40% from the year’s high of $64,895.22 on April 14.</p> <p>Billionaire investor Ray Dalio on Monday announced that he is holding bitcoin at Coindesk’s annual Consensus conference. </p> <p>The Bridgewater Associates founder did not give further details but said that in an environment where government debt is at historic levels and competition from China is increasing, the U.S. dollar is under pressure and diversification is important.</p> <p>He added that “bitcoin’s greatest risk is its success,” because as more people choose to put their savings into the digital currency, it becomes more of a threat to the traditional monetary system.</p> <p>“Personally I’d rather have bitcoin than a bond,” he said in the pre-recorded interview from May 6.</p> <p><span class="caps">SUNDAY</span> <span class="caps">SLUMP</span></p> <p>The catalyst for Sunday’s slump was cryptocurrency “miners” – who mint cryptocurrencies by using powerful computers to solve complex math puzzles – halting Chinese operations in the face of increasing scrutiny from authorities.</p> <p>The attention on miners in China – who account for some 70% of supply – is the latest front in a wider push by Beijing against the cryptocurrency sector.</p> <p>Major cryptocurrency exchange Huobi on Monday suspended both crypto-mining and some trading services to new clients from mainland China, adding that it would instead focus on overseas businesses. Others also suspended business in China.</p> <p>In the short-term, market players said, that is likely to lead to pressure on prices as miners sell bitcoin held on their balance sheets.</p> <p>Crypto market players said fears over the China crackdown would likely linger.</p> <p>“Nobody’s really sure about what happens next,” said Joseph Edwards, head of research at crypto brokerage Enigma Securities. “Crypto clearly finds itself in a tough spot in terms of the narrative right now, and it’s taken a lot of oxygen out of the room.” </p> <p>Bitcoin had stabilized from a bruising week on Saturday after Tesla boss Musk – whose comments on cryptocurrencies have been a key price driver in recent months – tweeted support for crypto in “the true battle” with fiat currencies.</p> <p>Yet after last week’s 25% drop, triggered in part by toughening language from Chinese regulators, bitcoin remains more than 40% below last month’s record high of $64,895.</p> <p>“It is too early to call the end of the recent bitcoin downtrend,” J.P. Morgan analysts wrote.</p> <p>Publicly listed bitcoin funds saw outflows of more than $530 million last week, their fifth straight week of loses, they said, in a sign of retrenchment by institutional investors. </p> <p> (Reporting by Stephen Culp and John McCrankin New York, Tom Wilson in London and Tom Westbrook in Singapore; Editing by Sam Holmes, Robert Birsel, Andrew Heavens, Andrea Ricci, Nick Macfie and Dan Grebler)</p> </body></p>