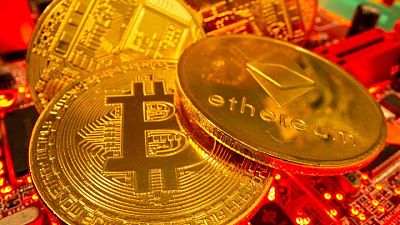 <p><body> <p><span class="caps">SHANGHAI</span> (Reuters) -Cryptocurrency miners, including HashCow and <span class="caps">BTC</span>.TOP, have halted all or part of their China operations after Beijing intensified a crackdown on bitcoin mining and trading, hammering digital currencies amid heightened global regulatory scrutiny.</p> <p>A State Council committee led by Vice Premier Liu He announced the crackdown late on Friday as part of efforts to fend off financial risks. It was the first time China’s cabinet has targeted virtual currency mining, a sizable business in the world’s second-biggest economy that some estimates say accounts for as much as 70% of the global crypto supply.</p> <p>Cryptocurrency exchange Huobi on Monday suspended both crypto-mining and some trading services to new clients from mainland China, adding it will instead focus on overseas businesses. </p> <p><span class="caps">BTC</span>.TOP, a crypto mining pool, also announced the suspension of its China business citing regulatory risks, while crypto miner HashCow said it would halt buying new bitcoin mining rigs.</p> <p>Crypto miners use increasingly powerful, specially-designed computer equipment, or rigs, to verify virtual coin transactions in a process which produces newly minted crypto currencies such as bitcoin.</p> <p>“Crypto mining consumes a lot of energy, which runs counter to China’s carbon neutrality goals,” said Chen Jiahe, chief investment officer of Beijing-based family office Novem Arcae Technologies. </p> <p>The crackdown is also part of China’s stepped-up drive to curb speculative crypto trading, he added. </p> <p>Bitcoin took a beating after the latest Chinese move, and is now down nearly 50% from it’s all-time high. It shed as much as 17% on Sunday, before paring some losses and was last trading steady in Asia. Elsewhere, Ether fell to a two-month low on Sunday, down 60% from a record peak hit just 12 days ago,</p> <p>Investor protection and money laundering are particular concerns of global financial regulators who are grappling with whether and how they should regulate the cryptocurrency industry.</p> <p>The latest shakeout in digital currencies also stems from tighter scrutiny in the United States. Last Thursday, U.S. Federal Reserve Chairman Jerome Powell said they pose risks to financial stability, and indicating that greater regulation of the increasingly popular electronic currency may be warranted.</p> <p>“Huobi always strives to abide by the evolving policies and regulations of each jurisdiction,” Huobi said in a statement to Reuters. </p> <p><span class="caps">BTC</span>.TOP founder Jiang Zhuoer said in a micro blog post via Weibo that its mining business will no longer be open to mainland China, while HashCow said it would suspend new businesses in China in a notice to clients. <span class="caps">BTC</span>.TOP and HashCow could not be immediately reached for comment</p> <p><span class="caps">DIRTY</span> <span class="caps">BUSINESS</span> </p> <p>The annual energy consumption of China’s cryptocurrency miners is expected to peak in 2024 at about 297 terawatt-hours, greater than all the power consumption by Italy in 2016, according to a study recently published in scientific journal Nature Communications. </p> <p>Chinese President Xi Jinping has pledged carbon neutrality by 2060.</p> <p>China has already lost its position as a global cryptocurrency trading centre after Beijing banned crypto exchanges in 2017.</p> <p>“Eventually, China will lose crypto computing power to foreign markets as well,” <span class="caps">BTC</span>.TOP founder Jiang wrote, predicting the rise of U.S. and European mining pools. </p> <p>Chen of Novem Arcae said the crypto craze, if not curbed, could turn into froth similar to the Dutch tulipmania in the 17th century – often regarded as the first financial bubble in recorded history.</p> <p>“The only difference is that after the tulip bubble burst, there were still some beautiful flowers left,” Chen said.</p> <p>“But when the virtual currency bubble bursts, what would be left are merely some computer codes.” </p> <p> (Reporting by Samuel Shen and Andrew GalbraithEditing by Shri Navaratnam)</p> </body></p>