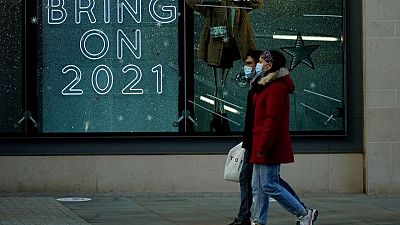 <p><body> <p><span class="caps">LONDON</span> (Reuters) – British employers called on Prime Minister Boris Johnson on Monday to overhaul regulation and tax rules to help them meet the challenges of Brexit, the post-pandemic recovery and preparing for a net-zero carbon economy.</p> <p>The Confederation of British Industry (<span class="caps">CBI</span>) said 2021 should be a turning point for economic policy to break the pattern of weak productivity that has weighed on growth for more than a decade.</p> <p>“This country will never have a greater opportunity to transform our economy and society,” <span class="caps">CBI</span> Director-General Tony Danker said. “This is the moment where we have a genuine chance to make big bets on how the UK economy will grow and compete.”</p> <p>The <span class="caps">CBI</span> urged regulators to prioritise investment, the creation of economic clusters around the country to foster innovation and better skills training.</p> <p>It also said a long-term plan was needed for taxation that would allow Britain to fix the damage to its public finances wrought by the biggest ever budget deficit in peacetime without hurting business investment.</p> <p>Britain’s economy slumped by almost 10% last year and is due to grow by 7.25% in 2021, according to the Bank of England. But the central bank has forecast that growth after 2022 will return to its slow, pre-pandemic pace.</p> <p/> <p> (Writing by William Schomberg; Editing by Helen Popper)</p> </body></p>