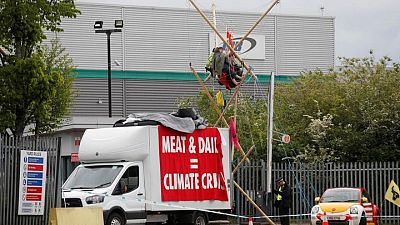 Around 50 protesters used trucks and bamboo structures to stop lorries from leaving McDonald’s four distribution centres in the United Kingdom, the group said.

A spokeswoman for McDonald’s UK apologised to its customers for any disruption.

“We are assessing the impact on deliveries to our restaurants and to menu items,” she said.

The group said it would remain at the sites for at least 24 hours to disrupt the company’s supply chain.

Images released by Animal Rebellion showed a replica model of McDonald’s golden M-shaped arches logo splattered with blood-like red paint and protesters suspended in the bamboo structures at the gates of a distribution centre.

“The meat and dairy industry is destroying our planet: causing huge amounts of rainforest deforestation, emitting immense quantities of greenhouse gases and killing billions of animals each year,” said James Ozden, a spokesperson for Animal Rebellion.

“The only sustainable and realistic way to feed 10 billion people is with a plant-based food system. Organic, free-range and ‘sustainable’ animal-based options simply aren’t good enough.”

Later on Saturday, the group said police had told activists at two of the four sites they would not attempt to remove them immediately and it still intended to maintain the blockades until Sunday.