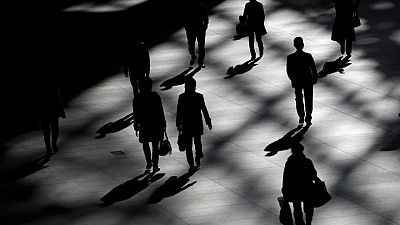 <p><body> <p>By Tetsushi Kajimoto</p> <p><span class="caps">TOKYO</span> (Reuters) – Japan’s unemployment rate probably inched up in April, a Reuters poll found, in the latest sign of a slight deterioration in the job market as the coronavirus pandemic hits the labour-intensive service sector.</p> <p>Other data next week is expected to show the Tokyo-area consumer price index (<span class="caps">CPI</span>) fell again in May as cuts in mobile phone fees by major carriers added to downward pressure on prices, making the central bank’s 2% inflation goal appear even more elusive.</p> <p>The weak indicators will likely highlight the fragile nature of the country’s economic recovery from a coronavirus-induced slump in the first quarter.</p> <p>The world’s third-largest economy shrank 5.1% annualised in January-March, dragged down by private consumption that makes up more than half the economy.</p> <p>Adding to pressure on consumer spending, data from the Ministry of Internal Affairs and Communications is expected to show the jobless rate rose 0.1 percentage point to 2.7% in April, according to a Reuters poll of 18 economists.</p> <p>“Since the states of emergency were issued in major cities (to curb <span class="caps">COVID</span>-19 infections), the employment situation appeared to turn for the worse again among those face-to-face service-sector firms which were forced to suspend business,” said Takeshi Minami, chief economist at Norinchukin Research Institute.</p> <p>Data by the labour ministry is likely to show the jobs-to-applicants ratio held steady at 1.1 in April, the poll showed, meaning that only about one job was available per job-seeker. </p> <p>Both labour market indicators are scheduled to be released at 8:30 a.m. May 28 (2330 <span class="caps">GMT</span> May 27). </p> <p>Separate data from the internal ministry, due out at the same time as the job market indicators, is expected to show Tokyo-area core consumer prices, which exclude perishables but include oil products, fell 0.2% in May from a year earlier, the same pace as the previous month, the poll found.</p> <p>Market players are closely watching the Tokyo-area <span class="caps">CPI</span>, which is available a month before nationwide figures, as a leading price indicator.</p> <p>“Core <span class="caps">CPI</span> will stay in negative territory for the time being as service consumption remains stagnant due to the state of emergency, despite rising energy prices, while lower cellphone charges helped extend price falls,” Minami said.</p> <p/> <p> (Reporting by Tetsushi Kajimoto; Editing by Kim Coghill)</p> </body></p>