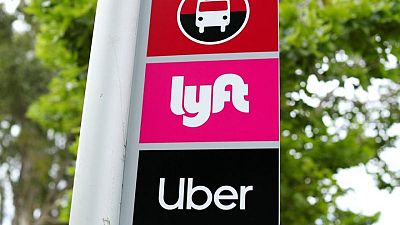 <p><body> <p>By Tina Bellon</p> <p><span class="caps">NEW</span> <span class="caps">YORK</span> (Reuters) -California’s clean air regulator on Thursday adopted rules to mandate that nearly all trips on Uber’s and Lyft’s ride-hailing platforms have to be in electric vehicles over the next few years, the first such regulation by a U.S. state.</p> <p>In written comments to the agency ahead of Thursday’s vote, Uber and Lyft said they supported the regulation’s goals but called for more government to aid their many lower and middle-income drivers with the costs for the transition.</p> <p>The rules, adopted through a unanimous vote by the California Air Resources Board (<span class="caps">CARB</span>), mandate that EVs account for 90% of ride-hailing vehicle miles traveled by 2030.</p> <p>Graphic on <span class="caps">CARB</span> electric-vehicle goals: https://tmsnrt.rs/3u5EVaq</p> <p>That is a lesser goal than the companies themselves have set: both Uber and Lyft last year committed to converting their U.S. fleets entirely to EVs by that year. </p> <p>But the companies said achieving those goals is unrealistic without additional government subsidies for EVs and charging infrastructure. </p> <p>The companies said <span class="caps">CARB</span>’s targets were based on uncertain and unrealistic assumptions, risking harm to drivers if EV and charging availability does not expand as projected by regulators.</p> <p>Several of <span class="caps">CARB</span>’s 14 board members shared concerns over the impact on drivers during Thursday’s hearing, criticizing the companies for not doing more to help them.</p> <p>“There is no way for us to make sure that the (companies) actually bear the costs to address the greenhouse gases and air pollution they’re creating and profiting off,” said board member Nathan Fletcher.</p> <p>The total cost of meeting the 2030 standard could reach $1.73 billion, according to the Union of Concerned Scientists, a nonprofit research and advocacy organization.</p> <p>Uber and Lyft have partnerships with rental companies and charging station providers to lower drivers’ EV costs. Uber has also said it will invest $800 million through 2025 to help drivers globally switch to EVs. </p> <p>The question of who will finance the costly transition is complicated by the drivers’ status as independent contractors, not employees, leaving regulators little ability to protect them. </p> <p>Some twenty groups submitted comments on the regulation, including General Motors Co and Alphabet Inc’s self-driving unit Waymo.</p> <p>For the vehicle industry, the rules offer a way to ensure EV sales at a time when many automakers pivot to battery-powered production in response to tighter emissions regulations, but fear lackluster consumer demand.</p> <p>Steve Douglas, vice president at auto industry group Alliance for Automotive Innovation, urged <span class="caps">CARB</span> to expand EV rules to the taxi industry and other public and private fleets.</p> <p>“The simple truth is sales require purchases and sales requirements should be matched to purchase requirements,” Douglas said during Thursday’s hearing.</p> <p> (Reporting by Tina BellonEditing by Chris Reese, Marguerita Choy and Karishma Singh)</p> </body></p>