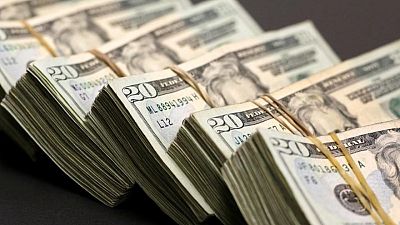 <p><body> <p>By Stephen Culp</p> <p><span class="caps">NEW</span> <span class="caps">YORK</span> (Reuters) – The dollar retreated on Thursday, hovering near a multi-month low as a risk-on rally drew investors away from the safe-haven currency, reversing Wednesday’s bounce.</p> <p>That bounce was prompted by the minutes from the U.S. Federal Reserve’s most recent monetary policy meeting, in which several policymakers said discussions on tapering of government bond purchases would be appropriate “at some point” should economic recovery continue to gather steam.</p> <p>That gave a boost to the greenback, which had been sliding in recent weeks due to repeated Fed reassurances that it is too soon to tighten its accommodative policy and that current price spikes do not portend longer-term inflation.</p> <p>“Most of the moves we’ve seen over the last 24 hours were over the Fed minutes,” said Ronald Simpson, managing director, global currency analysis at Action Economics in Tampa, Florida. “The market totally overreacted to them and Treasury yields shot higher.”</p> <p>“After some thought the market has realized the Fed is going to need months of better data before it begins to discuss the taper,” Simpson added. “Today, the markets took that to heart and it canceled out the moves we saw yesterday.”</p> <p>A rally on Wall Street and rebounding cryptocurrencies signaled broad, risk-on sentiment which, along with weakening Treasury yields, helped the dollar erase Wednesday’s advance.</p> <p>The dollar index was last down 0.46% at 89.792. </p> <p>That weakness helped boost the Australian dollar which also got a lift from strong April employment data. It was up 0.56% at 77.71 cents.</p> <p>The euro gained 0.37%, at $1.2219, and the dollar fell 0.38% to 108.80 Japanese yen.</p> <p>Canada’s robust economy and rising commodity costs have pushed the Canadian dollar to its strongest level against the dollar since 2015. The dollar was last down 0.60% against the loonie, at $1.2059.</p> <p>The cryptocurrency rollercoaster was on an upswing in the wake of a steep sell-off following China’s regulatory move against the digital assets.</p> <p>While that sell-off reversed course with the help of bargain hunters, cryptos were last well off their session highs.</p> <p>Bitcoin was most recently up 8.9% at $40,050 after plummeting to 54% below its record high, hit just over a month ago, after some of its prominent backers reiterated their support for the digital currency.</p> <p>Smaller rival ether gained 15.32 to $2,811. On Wednesday, it fell 22.8%, its biggest daily fall since March 2020.</p> <p/> <p> (Reporting by Stephen Culp; Additional reporting by Saikat Chatterjee in London; Editing by Richard Chang)</p> </body></p>