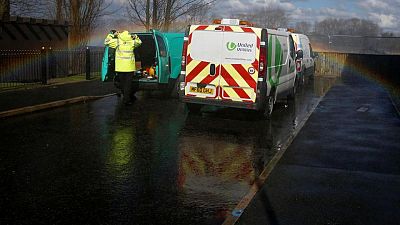 <p><body> <p>(Reuters) – Britain’s water regulator set out a 2.8 billion pound ($3.95 billion) green investment plan on Monday as it aims to lower pollution by utilities, some of which have come under fire for their environmental performance.</p> <p>Watchdog Ofwat said it is backing Severn Trent Water, South Staffs Water, Pennon-owned South West Water, Thames Water and United Utilities on new green investment projects worth more than 850 million pounds. </p> <p>It also proposed a further 1.9 billion pounds for future environmental projects in the UK, which is targeting net-zero carbon emissions by 2050.</p> <p>In separate statements, Pennon said that 81 million pounds of Ofwat’s investment was allocated for South West Water’s Green Recovery Initiative over the period to 2025. </p> <p>Larger rival Severn Trent said it has been earmarked to receive 565 million pounds. </p> <p>Some of Severn Trent’s projects will increase water supplies, trial the creation of two bathing areas in stretches of the River Leam and the River Teme and help customers to save water through installation of more than 150,000 smart meters.</p> <p>“Today marks an important step in this country’s green economic recovery, with the water sector stepping up to make a difference” said David Black, Ofwat’s interim chief executive. </p> <p>“From tackling the most pressing environmental issues to providing economic stimulus with the backing of jobs and training, there has never been a more important time to act.” </p> <p>Water utilities have faced scrutiny in the past for polluting water bodies and not preventing wastage, with the most notable action being a record fine handed to Thames Water in 2017 for pumping sewage into the River Thames.</p> <p>The sector was also questioned over a series of supply shortages and hosepipe bans in 2018.</p> <p>Ofwat’s plans are subject to a consultation, which is expected to run until June. </p> <p>($1 = 0.7087 pounds)</p> <p/> <p> (Reporting by Muvija M in Bengaluru; Editing by David Goodman)</p> </body></p>