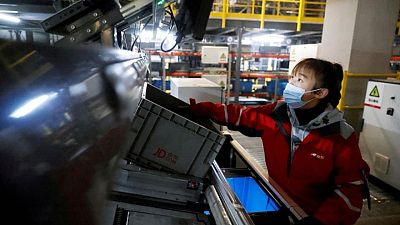 <p><body> <p>By Scott Murdoch</p> <p>(Reuters) -JD Logistics will price its shares between $HK39.36 and $HK43.36 each as the company aims to raise up to $3.4 billion, according to the company’s filings, in one of Hong Kong’s largest share sales in 2021. </p> <p>The logistics offshoot of JD.com Inc will sell 609.1 million shares in the deal which is 10% of the company’s total shares, the filings said. </p> <p>An over-allotment option, or so-called greenshoe, exists to sell a further 91 million shares that would raise up to a further $510 million.</p> <p>At that size, JD Logistics will be one of the biggest deals in Hong Kong this year following the Kuaishou Technology <span class="caps">IPO</span> in late January which raised $5.4 billion.</p> <p>The company recorded 22.4 billion yuan ($3.5 billion) in revenue in the first quarter of 2021, up 64.1% from the same period in 2020. </p> <p>Its gross profit for the quarter reached 230.7 million yuan ($35.8 million), down 72.7% from the same time last year, which it blamed on the pandemic impact and adding 60,000 workers to its headcount during the year.</p> <p>In its prospectus, JD Logistics said it expected an insignificant impact on its business from the Chinese government’s tighter anti-monopoly regulations of internet platform businesses.</p> <p>The company, it said, controls 2.7% of the integrated supply chain logistics market.</p> <p>JD Logistics’ <span class="caps">IPO</span> is expected by analysts to be a barometer of investor appetite towards major share sales following volatility in global equities markets over the past week, led by concerns inflation is starting to emerge around the world.</p> <p>JD Logistics will be valued at $34 billion at the top of the price range and seven high profile cornerstone shareholders led by SoftBank Group Corp’s Vision Fund and Temasek have taken shares worth up to $1.53 billion, or 45% of the <span class="caps">IPO</span>, according to the filings.</p> <p>The final price will be set on Friday and the stock will start trading on the Hong Kong Stock Exchange on May 28.</p> <p>JD Logistics said 55% of the funds raised would be spent on upgrading its logistics network in the next 12 to 36 months, while a further 20% would go towards technology development. </p> <p>JD.com spun off its logistics unit into a standalone entity in 2017 and then opened up its delivery and warehousing services to third-party companies. </p> <p>JD.com carried out a Hong Kong secondary listing in June last year which raised $3.87 billion.</p> <p>($1 = 6.4367 Chinese yuan renminbi)</p> <p> (Reporting by Scott Murdoch in Hong Kong; additional reporting Riya Sharma in Bengaluru; Editing by Diane Craft and Stephen Coates)</p> </body></p>