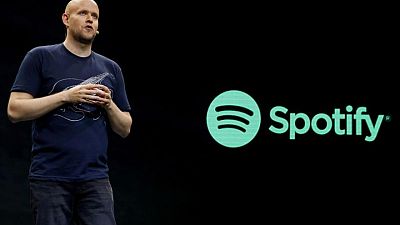 <p><body> <p><span class="caps">LONDON</span> (Reuters) – Spotify <span class="caps">CEO</span> and founder Daniel Ek said on Saturday an offer to buy Premier League Arsenal had been rejected by owner Stan Kroenke’s family.</p> <p>Ek took to Twitter to issue a statement correcting “inaccurate reports” that he had not made a bid.</p> <p>“This week an offer was made to both Josh Kroenke and their bankers that included fan ownership, representation at the board and a golden share for the supporters,” the Swede said. “They replied that they don’t need the money.</p> <p>“I respect their decision but remain interested and available should that situation ever change.”</p> <p>Ek said last month that he had secured the funds to buy Arsenal, valued at $2.8 billion according to Forbes.</p> <p>British media reported Arsenal greats Thierry Henry, Dennis Bergkamp and Patrick Vieira were backing Ek’s bid. </p> <p>The club’s American owners are under fire from fans following the North London team’s attempt to join a breakaway European Super League that collapsed within 48 hours of being announced. </p> <p/> <p> (Reporting by Alan Baldwin, editing by Ed Osmond)</p> </body></p>