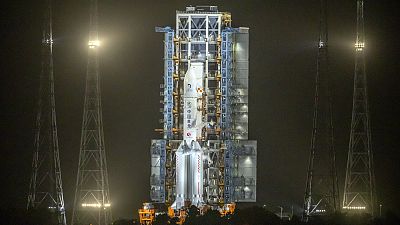 We don’t want to cast a cloud over your weekend plans - but that shadow overhead might not even be a cloud at all.

A large Chinese rocket, which is widely believed to be out of control travelling at 29,000 kmh, is plunging to Earth as you read this and is expected to crash at some point this weekend.

While this vague time frame is generally agreed on, where it will land remains the million-dollar question.

The Long March rocket will be one of the largest objects to ever make an uncontrolled entry into the Earth’s atmosphere - and experts aren’t sure precisely when or indeed where it will finally make an impact.

Here’s everything you need to know about the Long March rocket and its descent.

The Long March 5B rocket is one of the expendable launch vehicles developed and built by the China National Space Administration (CNSA).

The rocket at the centre of the debacle blasted off from Hainan Island on April 29 carrying the first Tianhe module which will form part of the living quarters of China’s new space station (CSS).

The rocket’s core is circling the planet in the Earth’s lower orbit but drag is slowing it down. With a drop in velocity, the rocket will also drop in altitude and will gradually be pulled to the ground by gravity.

Can it be stopped?

In a statement on Tuesday, the US Space Command said it wouldn’t be possible to know where the craft will enter the atmosphere “until within hours of its re-entry” which it expects to be on Saturday.

Authorities in the US are continuing to track the debris as it enters the Earth’s lower orbit. There was speculation that the Americans would attempt to shoot it down but this has been denied by military chiefs in Washington DC.

"We're hopeful that it will land in a place where it won't harm anyone. Hopefully in the ocean, or someplace like that,” Lloyd Austin, the US Secretary of Defence, said on Thursday.

Given its speed, however, a small change in its direction is likely to alter its trajectory significantly, which makes it difficult to pinpoint just where it will land.

What are the Chinese doing about it?

China’s space agency has so far remained tight-lipped about whether they are in control of the rocket’s descent or not.

Chinese state media have also been working to downplay the event, insisting the rocket will land in international waters and not on inhabited land somewhere in the world.

That being said, a similar event occurred in May 2020 when debris from another Chinese Long March rocket rained down over the Ivory Coast, damaging several buildings in the process. No injuries were recorded, though.

The incident, however, is raising eyebrows in the international community. As more and more countries compete in the space race, safety has increasingly been the priority to avoid such uncontrolled re-entries as the 1979 NASA Skylab incident where large chunks of a US space station fell to Earth and crashed in western Australia.

Ultimately, there are literally thousands of pieces of debris in the planet’s lower orbit that could fall to Earth at any time.¨

The 18th Space Control Squadron (SPCS) at Vandenberg Air Force Base in California is tasked with providing 24/7 support to the Space Surveillance Network and tracks more than 27,000 man-made objects in space at any given time.

Most of the time, these objects burn up on re-entry but the US’ space surveillance network is designed to alert the global community of any potential threats.

Current projections estimate that the Long March rocket will crash around 6.19 am CET on Sunday but it could be eight hours before or after that.

In an interview with Reuters, Harvard-based astrophysicist Jonathan McDowell said that he expected the debris to land in water as 70 per cent of the Earth’s surface is covered by ocean.

He added that, based on its current trajectory, a trail of debris could fall as far north as New York, Madrid or Beijing and as far south as southern Chile and New Zealand, and anywhere in between.