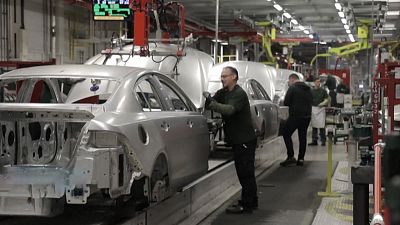 In this edition of Business Line, the monthly business barometer from Dubai, we take a look at how European ski resorts are faring throughout the coronavirus pandemic, the drive towards making more electric vehicles and an innovative company transforming how we connect employers and empower employees globally.

Connections in the workplace

With the pandemic making many of us feel isolated the world over, one company is leading the charge towards bringing us together. ProFinda transforms organisations through technology to make them hyper-connected and to unlock their universal skills by utilising their entire network of staff and contacts.

The company has made an ambitious start that has seen them participate at Davos, work alongside US ex-President Barack Obama's White House, and secure contracts from the Big Four, think tanks and more.

Roger Gorman, Founder and CEO of ProFinda says in any organisation in the world there are two key parts: “One is the inventory of people and their skills and the other is around the work that's happening. So, in order for us to create optimisation, we need to have a view of both of those and bring them closer together”.

At ProFinda, they assess companies with workforces of over 100, 000 that are losing over a billion dollars a year in the downtime looking for each other. Their AI tool has a data lake of employees for their soft and hard skills, from their achievements and interests, alongside payroll information and HR assets.

Gorman says this means managers can quickly find top talent both locally and internationally: “Rather than taking four weeks to try to find people they know through their own network and unconscious bias, the tool can ascertain the optimal teams in seconds”.

The tool also reaches out to encompass former employees, consultants and external collaborators.

CEO and founder, Roger Gorman, hopes to see the technology harnessed in other areas as well. After attending an international oncology event he envisaged the tool connecting the 43,000 attendees in a more meaningful way.

“It was left to a moment of about a week in Sweden when you're left to hopefully bump into someone who perhaps is working on the right project at the right time for you to collaborate,” he says, adding, “this is not innovation and this is not helping to cure cancer". ProFinda’s system can unlock those incredible moments where suddenly the right experts are working and talking with the right people at the right time, in the right work. That's where we start to see something hugely powerful emerge".

As pollution regulations become stricter globally, major automakers are gearing up to build electric cars, which they say will be on roads sooner than we think.

Around 2.5 million electric vehicles were sold worldwide last year. That's expected to increase by 70% this year, according to the American British information provider IHS Markit. US General Motors says there's a long way to go as these vehicles make up only three percent of the global market.

The Detroit based company has just unveiled its Chevrolet Bolt compact SUV. It's one of 30 new electric vehicles that they've pledged to bring to the world market by 2035.

“Bolt EUV allows us to extend that into one of the hottest segments in the market, which is the compact crossover segment”, he says.

The vehicle will go on sale in summer 2022, but other car manufacturers are in fast pursuit. Luxury car brand Jaguar recently announced that it will produce only electric vehicles from 2025. The British company will invest 2.9 billion euros annually under its reimagined plan. It hopes to see its first all-electric model by 2024 and it’s not limiting itself to solely electric. The brand is also planning to use hydrogen power to help slash carbon emissions.

According to Thierry Bolloré, CEO of Jaguar Land Rover, fuel cell technology is the logical, complementary step. He says that “to ready ourselves for the expected adoption of this natural energy source in the future, we will begin testing prototype fuels on UK roads this year”.

The ski industry is facing a difficult start to this year amid the ongoing pandemic. As Covid 19 measures are extended, many are worried about the future consequences.

The winter season in Italian ski resorts has been blocked from opening due to COVID-19 restriction measures.

Renato Antonioli, manager of Cima Piazzi Ski Station, says the situation is disheartening: “The timing is absurd. You can't say four hours before that the lifts will be closed. For 20 days I have been preparing everything for the reopening with my family".

Italy saw more than 100,000 people die due to the pandemic. In Lombardy, the country's hardest hit region, ski operators had to limit the daily number of skiers to no more than 30 percent. The latest measures, which were also introduced in France and Germany, came after new data revealed that 18 percent of new infections were caused by the British variant of the virus.

Gilles Kraan, CEO of Gimar Montaz Mautino (GMM) says they were expecting to make a turnover of around €600,000 to €700,000 from after-sales service, sales of rods, pulleys, lots of rubber wear and tear parts that are used on ski lifts and chairlifts. But instead, "everything has been cancelled, so we only made €66 000 in turnover, where we were expecting 600 000. It's still a terrible year for us”.

Some equipment suppliers say that unlike store owners, they have to prepare materials a year in advance, so the bulk of their financial losses are still to come. The Rossignol group saw a 40% loss of sales last year. Its president, Bruno Cercley, said the company estimated: “a decrease not of 40% but at least 70%, so the impact is still coming.”

They hope to see some change with the global rollout of vaccines being carried out.