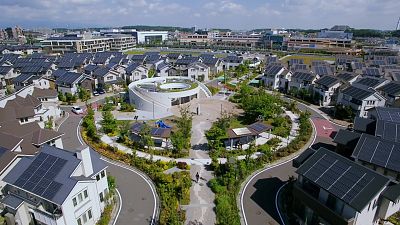 More than half the world lives in urban areas, but in Japan 92% does. This creates challenges in terms of sustainability, but Japan has found a solution: It's using the innovations of the Fourth Industrial Revolution to create new kinds of cities, smart cities.

You don’t need to be a megacity to be a smart city. In Japan, smaller communities are also using ground-breaking technology, like the Internet of Things and big ideas like the sharing economy to become more sustainable.

Fujisawa Sustainable Smart Town was built on the site of an old Panasonic factory. This new community is home to about 2000 people. Every house is equipped with solar panels and smart monitoring systems. They enable residents to track their energy consumption both at home and on a community-wide level.

According to residents of the Fujisawa Sustainable Smart Town, seeing the figures for yourself has a big impact, it encourages you to be more careful about your everyday eco-friendly actions.

"The city is autonomous in electricity and food for three days."

To reduce C02 levels, residents can also win rewards for good green deeds. They are also encouraged to cycle and share electric vehicles.

Unlike other tech-centric smart city projects, in Fujisawa residents were the first consideration.

Planners laid out a 100-year vision and took into consideration every aspect of life: energy, security, mobility, wellness, community, even emergencies.

Arakawa Takeshi is the General Manager of the CRE Business Development Group for the Panasonic Corporation. He says the city has environmental and energy objectives "linked to CO2 reduction, water savings, renewable energy use and, most importantly, a recovery plan in case of a natural disaster." They have made sure the city is autonomous in electricity and food for three days.

18 organisations worked together to deliver the project.

As the need for a healthy and prosperous life-styles increase in the world, and notably in China, the Fujisawa Sustainable Smart Town is gaining recognition as a pioneering case study in Japan.

Another Japanese eco-city is Kashiwanoha. The town’s powerhouse is revolutionary. Its smart grid facility includes one of Japan’s biggest lithium-ion storage cell systems, as well as solar and emergency gas-powered generators.

The grid is overseen by the town’s Smart Centre and can respond immediately to a power shortage, becoming autonomous for three days.

It has also helped reduce peak power consumption by over a quarter.

Dr. Eng. Deguchi Atsushi, Professor and Vice-Dean of the Graduate School of Frontier Sciences at The University of Tokyo, told me that Japan is building smart cities based on a Government concept called "Society 5.0". He describes the core idea behind the smart cities concept as being "people-centric" or "human-centric". According to him, Kashiwanoha isn't just "introducing the latest technology", it's ensuring "locals can master it to build a place where everyone can feel happy".

The Urban Design Center is the place local residents can find out about their smart city and bond as a community. Citizens can participate in workshops related to cities of the future. One resident described the workshop he joined in Kashiwanoha as a "collaboration between the residents and the region."

The centre also serves as a hub for the partnerships between the project’s different stakeholders from the public, private and academic worlds.

For Japan, the key ingredient to the success of the smart communities of tomorrow is collaboration.