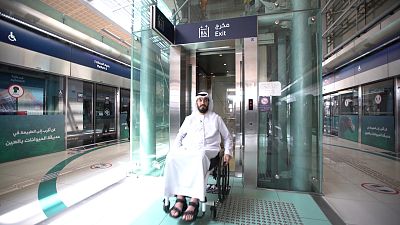 In 2016, the UAE adopted the term “people of determination” instead of "disability" in recognition of achievements in different fields.

With the change came laws to guarantee equality, accessibility and non-discrimination. This included social development policies.

One benefactor is the Rashid Centre for People of Determination, where they provide integrated educational services and a range of therapies.

Mariam Othman is Director General of the centre and told Euronews how things have changed.

"And they provide all the facilities which will give them a chance to be part of society. Now, we have children or students who are working in banks and hotels in some government sectors. These are students. They have some problems, but they can still be independent," she said.

Mohamed Almutawwa is the Sustainability and Green Economy Manager at Dubai's Roads and Transport Authority (RTA). He told us about the different accessible modes of transport available.

"If you're not willing to use their public transportation, if you plan your trip ahead, you can go to any destination in Dubai without any issues. All the modes of transportation have specifically included the needs of people of determination to make sure their trip is easy. You can do a lot of activities, whether you're in a wheelchair or you're in a different category of people of determination," he said.

Al Fahidi Fort was built over 300 years ago and is one of the oldest existing walls in the city. New Dubai is very accessible but this area has also been getting a lot of praise, as Shobhika Kalra, Founder and CEO of Wings of Angelz, explained.

"The people's mindset here is they care about each other and they're making an effort to make it accessible for everyone. So I am very independent from when I was very young and it wouldn't be fair to take that independence away from me," she said.

It's that independence, which is at the heart of the strategy. Dubai NorthStart provides training, education and career pathways for people of determination, as Managing Partner, Rich Hadnum, explained.

"Inclusive organisations are shown to generate higher profits than their non-inclusive peers. Aside from that, one in seven people globally are classed as people of determination and unemployment rates can be as high as 70, 80 per cent even in economically developed countries. So there's just a huge market to provide support and to help these individuals to find suitable careers," he said.

One of those successful placements was Mohamed Al Mulla, who's now a community ambassador at Zabeel House, a bustling neighbourhood hotel.

Luke James, General Manager at Zabeel House by Jumeirah, The Greens, said he went through a rigorous selection panel and process.

"He was up against about nine or 10 candidates. And you've seen him here today. He just lights up the room. He welcomes every single one of our neighbours, puts a smile on their face. So he was a natural. He was the best fit for the job. And he's been with us nearly a year now," he added.