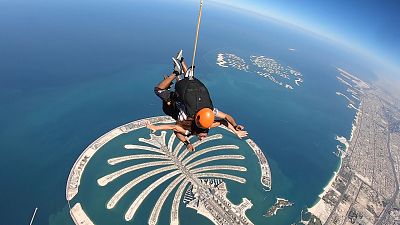 Business Line is your monthly business barometer, brought to you from Dubai.

In this edition, we find out about Rotor Deconstruction, a Belgian company inspired by the circular economy that transforms construction waste into desirable products in an effort to cut waste and reduce imports.

We also take a look at 'Pitch Up In The Sky', an event held in Dubai and the first of its kind: a collaboration between Tiktok and the Gritti Fund, which had young entrepreneurs from the Middle East and North Africa making business pitches seconds before skydiving over Dubai.

Also, Hamleys in London is celebrating its 260th anniversary this year. The toy store is hoping for a big Christmas despite the COVID-19 pandemic, as families enjoy intergenerational play while spending more time at home.

Each year in the European Union, hundreds of millions of tonnes of construction materials end up in landfill sites. One Belgian cooperative has a solution inspired by the circular economy.

The linear, often wasteful economy we have known since the industrial revolution is in need of a seismic shift: producing, using and disposing of products must give way to recovering, regenerating and repurposing materials if we are to lead a sustainable existence.

The construction industry is a major contributor to waste; in the EU alone, the sector generates 385.5 million tonnes annually.

Maarten Gielen, Rotor DC's Co-Founder, says they were determined to do something about that:

"Brussels every year exports hundreds of thousands of tonnes of materials. At the same time, (it) imports new materials at the same rate.

"We want to make a bridge between this waste export and materials import and say 'Ok, can we make materials loop in a shorter circle?'

"You could say that salvage and the reuse of building materials is quite trendy at the moment. We see people from big corporate firms that would have never considered salvaging materials that are quite interested in and quite open to the idea."

Maarten's colleague and Rotor DC Co-Founder Lionel Devlieger says they studied what was being thrown away:

"We spent a lot of time going to companies, mostly in Belgium, looking at what ended up in their waste containers and see whether some of that is recurrent waste.

"This is often production waste so it can be very clean, it can be very appealing even, for designers to work with whether that could be integrated as raw material for other goods."

Stephan Kampelmann, Chair for the Circular Economy and Urban Metabolism at the Université Libre de Bruxelles says the current wasteful situation has to change:

"So it's just that Rotor DC is a company that has a vision beyond the current situation, in which these things are very small, niche activities.

But I think in the future they'll be the ones that show a new model in which we don't take it for granted that you can just do whatever you want with the environment."

Rather than a model based on over-consumption of raw materials with cheap labour, the production paradigm is shifting to one which values skilled labour and lower dependence on natural resources.

Pitch Up In The Sky

A recent event here in Dubai has taken business pitches to new heights - literally! Entrepreneurs taking part in Pitch Up In The Sky had one minute to pitch their start-up idea to a panel of world-renowned investors. But if that wasn’t pressure enough, they had to do it seconds before jumping from a plane and skydiving over the city.

Three budding entrepreneurs in need of investment, three pitches to a panel of world renowned investors via social media platform TikTok - and one plane! Dubai played host to a start-up pitching competition with a twist this month.

"In uMore, we want to learn from the past and build a future where we can democratise well-being and stress management."

Dr Marcel Munster, Entrepreneur, Speaker and Founder of the Gritti Fund says the event is really about overcoming fear:

"It's the analogy of what can happen if you look to the other side of fear and that's really the deeper meaning behind it.

"The founders that we have as finalists are from all across the Middle East and Africa.

So it was really the investment focus as well as Dubai as being the place that really wants to push limits."

"This is the time to start a business because on the one hand, many businesses are failing. And on the other hand, new businesses need to be built."

The panel of investors included Lars Rasmussen, the inventor of Google Maps, Mitch Lowe, a founding executive of Netflix and Bill Tai, the first investor in Zoom.

I asked Bill what he looks for in a fledgling start-up:

"It's (in) a big market that is going through disruption that's well-timed: that's one.

Two is the right entrepreneur, that really just has really good integrity and hustle.

"The great thing about the UAE and Dubai is that it has a rule of law framework; the ability to operate is a lot more straightforward in that environment."

The MENA region has an average age of under 30 and an increasingly skilled workforce. For these young entrepreneurs and their investors, that means the sky is by no means the limit.

A world first, Pitch Up In The Sky became not only the world's first start up-pitch to be live-streamed on TikTok, it became the most viewed startup pitch event in history: viewing figures from Tiktok at the time of writing exceed 2.2 million views in over 89 countries at the time of writing.

Toy companies are hoping for a bumper Christmas despite the coronavirus pandemic. 260-year old London toy shop Hamleys is no exception.

Although sales have been significantly impacted this year, the success of online purchases and pop-up shops have done well for the company.

For many businesses feeling the pinch in the midst of the Covid-19 pandemic, Christmas offers a glimmer of hope. Those in the toy business believe widespread lockdowns may increase demand for what they have dubbed intergenerational play.

“Our theme this year is all about intergenerational play, about classics and really bringing the family together.

"I think everyone's in the house a lot. So, everybody really wants that cosy, family feel."

"Sales generally across the high street have been very flat. So, I think we'd be naive to think that we're going to have a Christmas like we had last year, but we are having phenomenal success online, we are opening pop-up stores at a rate of knots.

So, I think we will have a really successful year, just in a slightly different context."

In previous seasons, film merchandise was an important factor for the toy industry at Christmas but in 2020, it looks like computer games will be key.

But, Victoria says, it's often the age-old classics that can be relied on to sell, no matter how low tech:

"We've had phenomenal success with Lego, huge success with Barbie and the classic board games are still going strong.

"Every year, there'll be a new invention of it. I think even more this year is the year when everybody is going to be really encouraging each other to sit down and play together."