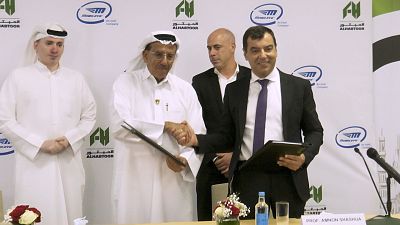 In this week's Business Planet on Euronews, reporter James O'Hagan is in Dubai and meets the head of multi-billion euro company, Al Habtoor Group, to discuss announcements that it will collaborate with an Israel-based subsidiary of Intel called Mobileye.

Plus, the devastating wildfires in California are putting the state’s huge wine industry under considerable strain because of smoke-tainted grapes.

Dubai-based Al Habtoor Group spans sectors from automotive to hospitality, and its founder was quick to act on the new business relationship between the UAE and Israel, by announcing plans to open an office there.

"I have called for this for a very long time, I mean years, to communicate with Israel, for Israel to communicate in general. I'm talking about Arabs and Palestinians, etc. It is very important. You know, we have no borders with them.

"I have a relationship with a lot of Jewish all over the world and Israeli as well. And I think it will be a benefit for both countries. Now let us test the waters. You know? What is the benefit between the two countries? You know? How are we going to benefit and how are they going to benefit from us.

"But I can see there will be good, positive things between the two countries. The Israelis are very advanced in technology and in this area we are going to cooperate with them," he told Euronews.

Khalaf Al Habtoor also talked about his company's collaboration with Mobileye, an Israel-based subsidiary of Intel which is developing driverless vehicles and 3D mapping for smart cities.

Amnon Shashua is the president and CEO of Mobileye.

"Al Habtoor group has fleets of thousands of vehicles, rental cars, and we would be equipping at least 1000 vehicles with a device that provides a driving assist," Amnon Shashua told Euronews.

"But in addition, the device also extracts critical data from the scene without violating any privacy of anyone. This data is sent to the cloud and patched together through cloud processing for creating information about the infrastructure of the roads.

"For example, whether the roads contain cracks, whether lanes need to be repainted. Also dynamic data about congestion, information on how to not only control the traffic, but to reduce the risk of accidents and do preventive maintenance on the roads," Amnon Shashua added.

Also in this week's Business Planet, Euronews looks at the devastating impact wildfires in California are having on the wine industry in the state, as producers fear that smoke-tainted grapes could make their 2020 vintage a disaster, leading to huge losses.

"I've been here growing wine grapes for over 38 years and I have never experienced or seen anything like this. Obviously the longer that the smoke stays, the greater the risk of guaiacol, which is a naturally occurring compound in smoke, and will affect the grapes in a way that could cause what's called smoke taint in the vine," Jim Bernau, founder of Willamette Valley Vineyards, told Euronews.

"These compounds don't sit on the outside of the grape. It actually absorbs into the skin so you can't wash it off."

"Your resulting wines can taste and smell overly ashy or smokey and obviously that's not a character most people want in their wine," she said.

Business Planet also takes a look at how the traditional office space is changing during the global Covid-19 heath crisis, with more people working from home and less inclined to travel for work, requests are on the increase for something more flexible.

The 'flexible space' trend is leading designers to toy with the idea of what an office should be.

Designer Sam Kopsch created interiors a little bit different for clinets in London, after surveying people about what triggers happiness for them.

She said: "We sent out surveys to get people's opinion on what happiness is, and it was everything from what happiness is to what colours trigger happiness. So, the main public spaces were things like outdoors, being at the beach, hiking, childhood memories, like toy trains, giant bugs and we've implemented that across the space.

"You can naturally social distance, you're not in an office per se. But it's just a really good break from being stuck at home," Sam Kopsch added.

The rise of lockdown robots - and Nissan takes on Tesla

The rise of robots, automation and e-commerce in the post-pandemic world