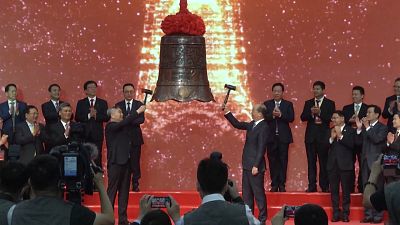 In this episode of Business Line, Euronews looks at how Beijing has bounced back amidst worsening trade relations with Washinton. We also look at the digital marketing boom and speak with the founder of one of the world's fastest growing agencies - and we find out how Turkey’s luck has turned with a gas discovery.

Nightlife has returned to Beijing following Covid-19 restrictions - and a new Nasdaq-style capital marketing system called Chi-Next has opened there too - good indicators that the country's economy is on the rebound with GDP rising to 3.2% in the second quarter of 2020, after the inevitable contraction in the first.

But as the U.S. gears up for its presidential election, Donald Trump has been reigniting trade tensions with China.

To try and smooth things over, the Chinese Ministry of Foreign Affairs has been addressing Republicans and Democrats in Washington.

"China hopes that the Democratic and Republican parties in the U.S. can view China and China-U.S. relations in an objective way, and work with China to advance China-U.S. relations featuring coordination, cooperation and stability, which serves the common interests of people in China, the U.S. and the whole world," Zhao Lijian, a spokesman for China's Foreign Ministry told Euronews.

In Dubai, Create Media was recently ranked within the top 50 fastest growing marketing agencies in the world by U.S. trade publication Adweek.

Euronews met with its founder, Tom Otton, to discuss the rapidly evolving world of social media and how sometimes you have to 'fake it until you make it'.

"So Create Media started around 2010. When we first started up and we had our first big client coming in and we were presenting a website to them. It was a client that we shouldn't really be working with. They were way out of our league. We were just moving into our first actual premises. So I kept delaying, I kept delaying. Finally, we've got to come in. But we moved in and we hadn't had electricity connected.

"I phoned a friend and said, is there a large battery that I could plug a computer into? I put it underneath the boardroom table, and did the full presentation that way, we had about fifteen people in the agency and we had them sat around on computers with no electricity, pretending to work," Tom Otton, founder and managing director of Create Media, told Euronews.

The agency now works with big clients, including: Visit Dubai, part of Dubai Tourism, Expo 2020, handling all of their social media, and with Emirates Airline, on a project basis, handling a lot of their video content.

"So it's been a roller coaster to start off with. We lost a few clients who were negatively affected quite significantly. But outside of that, we've seen growth. Last year we grew headcount by 91 per cent. We're on track, this year will probably go around about 50 to 60 percent headcount again. So the growth has been rapid over the last three to four years.

"Adweek in the US have the fastest growing agencies awards. We've ranked forty third on that out of every agency globally. We were the only agency in the Middle East on that and I’m confident that we’ll make that list again this year," Tom Otton added.

The discovery of a large natural gas reserve off the Black Sea coast could alleviate Turkey’s economic woes. Though unlikely to propel it to the status of a regional energy hub, it could lessen Turkey’s reliance on Iran and Russia for energy while giving its economy a welcome boost.

If confirmed as recoverable, this gas discovery is certainly welcome news for a country whose energy imports last year totaled around 35 billion euros.

The discovery comes as tensions between NATO allies Turkey and Greece are running high over oil and gas exploration in disputed waters in the eastern Mediterranean.

Dr. John Bowlus, Editor in Chief of Energy Reporters, Center for Energy and Sustainable Development at Kadir Has University, said:

Globalisation is no longer business as usual. Coronavirus has changed how the world works ǀ View