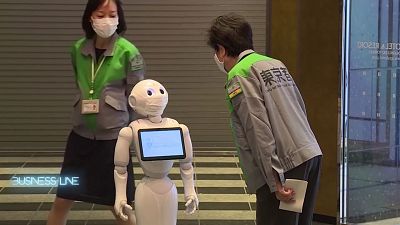 In this episode of Business Line the team examine how the economic crisis prompted by the coronavirus pandemic is likely to see companies accelerate plans to adopt innovative Artificial Intelligence technologies.

How do you organise concerts and live performances given the current health restrictions surrounding COVID-19? Much of the live entertainment industry is simply incompatible with social distancing. So does that mean the end of packed play houses and sold out festivals?

Jere Harris is the CEO of Production Resource Group. The company is best known for putting together some of the biggest live events in the world - from Broadway plays to Olympics ceremonies.

Admitting the lockdown has hit hard, he says the business will adapt: "So for us as a company and what we do, our whole world has come to a stop. We, you know, on average would do 15 to 20 million US dollars a week in revenue. Boom. Full stop. We've had to furlough people all around the globe. Where restaurants and bars will open, and they can have some form of social distancing, it's impossible to operate a Western theatre production, or a Broadway show, with social distancing… economically, even if you spaced every seat apart.

"I think it will change us all. It will change the company for good because we'll look at things differently now. We're seeing a lot more opportunity to stream. You can accomplish a lot with the technology we have today, and it may get some people to realise there is a lot we can accomplish in a simpler way."

But Production Resource Group has been quick to adapt to the new reality and utilise the company's skills in other ways. It has already offered its expertise, in rapid makeshift deployment, to help fight the pandemic at the frontlines in Berlin and New York.

"One thing about the production industry is that everything we do is temporary," explains Harris, adding: "So if a show is playing in Dubai for two nights in March, we set it up, we do the show, we take it down, we go to Abu Dhabi. Everything is about deployment and about being able to improvise, So, what we did in the Berlin hospital was, we supplied all the infrastructure, so that the medical personnel could operate and create a temporary hospital on a different scale, than we would do for U2 or Coldplay or something like that. But nonetheless, it was, everybody said, sure, we can do that."

"There is no better motivation than survival"

Business prospects in the age of the coronavirus might seem rather bleak right now, but it’s not all doom and gloom. Many companies are finding new opportunities within the realm of E-commerce.

Mastercard’s Khalid Elgibali spoke to Euronews' Natalie Lindo about some of the business and consumer behavioural trends since the start of the global pandemic.

Natalie Lindo, Euronews: "We’ve seen the negative impact that widespread lockdowns are having on the global economy. But what are the key trends you’ve seen in terms of consumers and businesses since the start of this pandemic?"

Khalid Elgibali, Mastercard: "It would probably be inaccurate to say that the economy as a whole has been negatively impacted. There are segments, there are sectors which are actually on a more steep vertical curve rise.

"I'll give you an anecdotal example. For these home entertainment streaming platforms, until three months ago, I just had one. And today I have five. And I'm sure there are many more kind of consumers, like me - who've had to change their behaviour. So there's segments and sectors in this economy that have benefited. Now there are segments and sectors, it goes without saying: travel, hospitality, tourism, dining out at restaurants which have been impacted. And those have had to change their business models.

"There's no better motivation than survival. Many of the traditional revenue streams that were based on customers physically visiting certain stores are just no longer there."

Natalie Lindo, Euronews: "You’ve recently published a report on the explosion in the number of people now using cashless payments. Can you tell us about those findings?"

Khalid Elgibali Mastercard: "Eight out of 10 people surveyed are saying they have a concern about their continuing use of cash because of questions in their minds or concerns… is it clean enough? Is it safe enough? And so on. And very interestingly, 70 to 80 percent of consumers are saying they're just not going to use cash. Period. Customers saying, my habits are going to change and they're going to change for good. And many of these changes will create new segments and new industries as well."

Rise of the robots

As human interaction is kept to a minimum the world over, machines are increasingly being drafted in to fill the void. From China to Russia and the US, robots and automation are rapidly becoming an integral part to how some companies adapt to social distancing. With less humans on site, bots can be deployed for essential cleaning, shelf stocking and deliveries for businesses of all shapes and sizes.

"I think today we have five robots running, we've had up to 10, it depends on their availability, and right now some are out mapping, so the distance gets further," says Stannard.

Brad Bogolea is the CEO and Co-founder of Simbe Robotics, a specialist in autonomous mobile machines. He believes by taking humans out of the equation, robotic shelf stockers and cleaners like the firm's Tally robot could have an immeasurable impact on stemming the virus’ spread.

"Tally's a fully autonomous mobile robot that's designed to really help retailers better take inventory within retail stores. The goal of Tally is to help ensure our product is always stocked in the right place and has the right price. So with COVID-19, we think there's a stronger case now more than ever for automation and better data within retail. We think that will drive greater adoption of robotics."

But could this acceleration towards robotics and automation have a detrimental impact on workers? Companies like Brain Corp insist that humans still have a place in the workforce.

"We're not trying to replace a human, and the companies that generally do try to do that in robotics often fail, because humans are so flexible and can perform so many other tasks," says the firm's product vice president Phil Duffy

"We are an advanced tool that allows them to perform at a higher productive level that really enables them to focus on the higher value tasks that robots aren't good at," he adds.

Whatever one's view, the coronavirus crisis only looks set to accelerate this drive towards automation. In Russia workplaces and bus shelters are having intelligent temperature checking turnstiles installed, and in China a 1.3 million square metre 5G-powered smart port can unload and store cargo automatically.

Belgium hospital employs robot to protect against spread of COVID-19