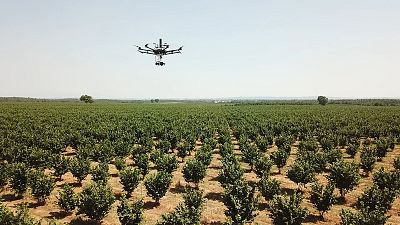 On this week's episode of Futuris, Euronews visits a hazelnut orchard in Italy to see how the new generation of robots can help farmers and agronomists make agriculture cheaper and more environmentally friendly.

Very large farmlands, like the research hazelnut orchard in Ronciglione, inevitably risk wasting water, pesticides, fertiliser and other resources: all plants across large areas have to receive the same treatment, whether they need it or not. To solve this problem, researchers are working to make plant treatment more precise.

One of those researchers is Tuscia University agronomist Valerio Cristofori:

“Precision farming allows us to carry out targeted treatments at the right time with the right quantities, depending on the actual needs of the plant — something that traditional agriculture today tends to neglect.”

A PANTHEON project robot moves through the orchard, stops and uses its camera to take images

Determining the individual needs of each plant would take humans too much time and effort, so that’s where robots could help. This prototype is being developed to move around a hazelnut orchard autonomously, taking measurements of the trees.

“We collect data with a laser scanner for 3D geometric reconstruction, and we use cameras to take multi-spectral and high-resolution images to assess the physical or health status of each tree.”

The robots send their data to a centralised computer system, also developed by the European research project PANTHEON. An easy-to-use interface helps agronomists with everything they need to make their decisions — from weather data to detailed information on how the plants are doing.

“In the future, there will also be a 3D model of each tree," she says, "with the recommended treatments — should it be pruned, is it well-watered, well-fertilised, with the whole farming history of that particular plant."

The engineers use motion-capture technology and autonomous driving algorithms to make the robot as accurate as possible. One of the goals is for the robot to use a special paint marker so it can label tree branches that need to be pruned.

“We’re talking about marking branches so we put a lot of effort into the aiming algorithm, taking into account everything from the wind speed to the position of the tree and the robot, all the uncertainties that could be simulated digitally,” explains Flavio Palmeri, an automation engineering visiting student at Roma Tre University.

Humans will still have to prune the branches manually but the robot will make them easier to find.

“The robot being able to mark the branches that need to be pruned would certainly provide a significant advantage to the agronomists on the ground — it makes the plants easily identifiable, so even an untrained agronomist would be able to immediately determine which branches to cut, and that will greatly facilitate pruning tasks.”

An Eye in the Sky

And to inspect large orchards even faster, researchers from the ULB University in Brussels are working with their colleagues at TRIER university on an autonomous drone: its cameras help to determine irrigation needs, find pests or disease and predict the harvest from the sky.

All these new methods have clear commercial application, says Andrea Gasparri, Professor of System and Control Theory at Roma Tre University and a PANTHEON project coordinator:

“The main players in the confectionery industry are certainly interested in this type of technology, simply because they’ll be able to boost the production quality while minimising the environmental impact — which is something that the major players have recently been showing an interest in.”

Researchers say their robots won’t replace human workers. They will, in a nutshell, take care of some tedious tasks and cut down on pollution and waste.