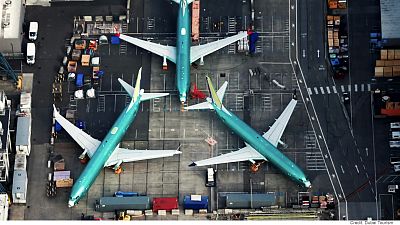 Can the American airplane manufacturer Boeing recover from the grounding of its Max Fleet?

Global air travel has been taking a hit following the grounding of Boeings 737 MAX fleet, which was banned from flying earlier this year after two fatal crashes.

One involved Ethiopian Airlines in March and the other was the Lion Air incident in Indonesia just five months earlier.

Now, dozens of aircraft are stranded at the plane makers’ Seattle factory, causing it to be dubbed the world’s most expensive parking lot.

At the time, some analysts predicted the aviation giant, let alone the MAX series, was too big to fail.

Boeing has recently announced plans to take a 4.3 billion euro charge in the second quarter of this year, which would, at least partly, compensate airlines with grounded Max planes.

" I think they understand that the world has sort of decided that Boeing does bear a lot of the responsibility here for what happened," says transportation analyst, Seth Kaplan.

"Now, finally they're taking this proactive step, paying out that money, without that being imposed on them."

Despite the company taking a hit from reduced production of the 737 which is projected to increase later in the year, its shares rose two per cent on news of the compensation.

But though the Max is expected to return to service in the fourth quarter of this year, the aircraft may be grounded longer than expected as Boeing still faces tough scrutiny from regulators around the world.

The thriving marketing business that embraces the safety of personal data

The road to a fully digital society isn’t always a smooth one.

According to ‘The Pulse’ report almost seventy per cent of senior executives in the Middle East feel digital adoption and cybersecurity are the biggest obstacles facing their businesses.

So, what can organisations do to meet these challenges?

Alya Al Zarouni, the executive vice president of Dubai’s International Financial Centre says that the key findings of the report, which looks at senior leadership attitudes towards corporate learning and development, is that cybersecurity, big data and digital adoption or transformation are, globally, at the forefront of all their priorities.

"But it's actually much higher in the Middle East, which is surprising. The other takeaway is that executive education is still a priority."

"Organizations believe that the learning providers need to reinvent themselves, reinvent their programs to make sure they cater to the current and future needs of those organizations. So there is still a lot of work to be done."

The study looks at the challenges leaders are facing right across the Middle East. But in the UAE, according to Alya Al Zarouni there is a need to really move faster.

"One of the reasons could be that we are really playing catch up when it comes to digital transformation."

"Of course, when you have more systems you have more data sitting on the Internet on clouds and servers and then cybersecurity becomes an issue. You need to protect your data."

How does the UAE specifically compare to the rest of the region?

Alya Al Zarouni believes the UAE was realized the importance of the findings in the report, when it comes to cybersecurity, data privacy and digitization, many years ago.

"In Dubai, we have the information security regulations, we are all government entities that are mandated to comply with certain requirements to ensure that data is protected for everyone in Dubai."

She says the key takeaways from the Pulse report are there is a real need to work on the learning and development of their employees.

"Having all the controls in your system for cybersecurity would not benefit you if your staff are not aware or they don't know how to really act when they are in such situations."

"It's very critical for an organization to be sustainable to grow and move forward but then human capital is equally important."

"People can actually learn from each other. So, we've had this in the DiFC actually where internal staff are training other staff. We have on-the-job training as well. There is also a mentorship that adds a lot of value as well to help them grow within the organization."

"And there is also the e-learning, which is becoming more and more advanced every day and we're seeing actually good outcome from those training sessions."

Alya Al Zarouni worked as a coder for three years and, she says, whilst she hated it, it actually gave her an edge and helped her grow within the DIFC:

"Everything that we do today is about automation whether you're in I.T. and procurement or in a client-facing department. So being a coder helped me really structure those processes."

"When I joined IT many years ago it was really a male-dominated field or career."

But then I can see it today, especially in the UAE, a lot of women are actually leading and heading I.T. departments, which is really interesting."

Jebbit and the issue of cybersecurity

Data privacy has become a hot-button issue in the last few years.

But, at what point do companies cross the line when collecting personal information?

Jonathan Lacoste, the co-founder of Jebbit, a company that transforms mobile traffic into actionable data, says their approach is: why don’t we simply ask you. Why don’t we engage in a conversation?

"The idea behind Jebbit is that in digital marketing, every website you go to, every email you see, the world is trying to get more personalized where we want to understand you better."

"But the data that marketers are using for that is called behavioural data and transactional data."

Jebbit has built a technology to allow marketers to ask consumers questions and then use that data to inform their AI personalization strategy.

So what are some of the ethical considerations of this?

"That is the central question. One technology company is collecting consent when you come to a website, but they pass it on to three other different advertising and marketing technologies in order to send you that relevant email or that personalized ad, which frequently there are dozens of companies interfacing in this process. It becomes very complicated in terms of who is the controller and who is the processor."

Jonathan Lacoste says there are some applications for technology that are just happening or are just around the corner that are exciting for him:

"In marketing, there's very few true applications of A.I. we've seen at scale yet. And so just as a consumer one that I'm particularly excited about is the advancements in autonomous vehicle driving and Tesla, in particular, has taken the lead on that."

"Elon actually announced just the other week that by the end of next year supposedly they'll have an entire fleet of robo taxis that are able to know when you parked your Tesla and going into work, they'll be able to drive around."

"Every time I either jump in a Tesla or I read a little bit more about the A.I. that's fuelling that, it's so impressive to me how that company is able to send software updates in your car, improving it over time continuously, as opposed to buying a car driving it off the lot and it depreciating over time."

"So, I think there's just so much space for innovation in the automotive industry and we're just getting started."

Brief from Brussels: How safe is our personal data online?

EU gets tough on cyber security