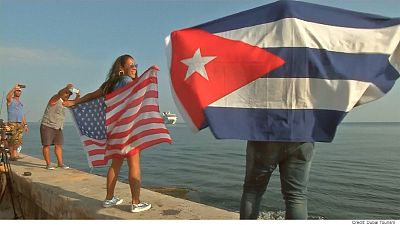 US and Cuba tensions bubble up again

As talks to avoid a full-blown trade war between the US and China unravelled in emphatic fashion this month, an older feud between Washington and another communist state also bubbled back to the surface - conflict with Cuba.

Three years ago, when the then US President Barack Obama visited the Carribean island nation, it was seen by many as akin to the fall of the Berlin wall; that is, the end of an era of enmity and stand-off with an old adversary. It seemed like Washington and Havana might finally have turned the page on their cold war history.

But under President Trump, the sanctions against Havana are ramping up again.

Washington has re-activated a dormant law known as Title 3 of the Helms-Burton act. This is a federal law introduced in 1996 under President Bill Clinton's administration. It allows anyone whose property was nationalised after the Cuban Revolution in 1959 to sue the individuals or companies profiting from their former holdings.

Mike Pompeo, US Secretary of State gave this justification:

“Sadly, Cuba’s most prominent export these days isn’t cigars or rum. It’s oppression. Detente with the regime has failed.

"Cosying up to Cuban dictators will always be a black mark on this great nation’s long record of defending Human Rights.

"For these reasons I’m announcing that the Trump administration will no longer suspend Article (sic) 3.”

Cruiseliner company Carnival Corp was the first to be sued for profiting from expropriated Cuban property. Exxon Mobil Corp, the largest US oil producer, then sued Cuban state-owned Cuba-Petroleo over a refinery and other assets seized in 196O.

The Cuban administration has reacted furiously.

“This will bring greater hardship and shortage of supplies for our people. I urge the international community to stop the US' irrational and irresponsible actions and take measures to do so before it's too late."

As Havana was forced to ration basic foodstuffs this month, the European Union, Canada and other countries have said they’ll take the issue to the World Trade Organisation, since the US has no jurisdiction over their citizens’ actions in Cuba.

One important factor that might keep Cuba afloat is tourism; with the rest of their economy under pressure, the steady influx of spending from overseas visitors is more important than ever.

Is data the new oil? One global data analytics software manufacturer thinks so; Alteryx has just opened a new regional headquarters in Dubai to capitalise on the next phase of the information age boom.

Data analytics is the process of taking raw information and turning it into a valuable asset through which you can tell better stories across all platforms.

Spending on business intelligence and analytics software in the United Arab Emirates exceeded 37 million Euros last year, with projected growth of nearly eight per cent expected to occur during 2019.

Byron Gavin,Head of Data & Analytics at Red Blue Blur Ideas said the trend is ever upward in Dubai:

"We're seeing a very big demand for it in Dubai and obviously the rest of the world, but the functionality it can provide is saving people time and giving people an enormous amount of value."

"Dubai Airport is doing sentiment analysis for travellers coming through the airport, to make sure that bathrooms are clean, restaurants have good food and the waiting lines are short.

"I’ve often heard people saying that data is the new oil and nd the reality is there will be almost as much economic value coming from data as there is oil."

Game of Thrones fans had to bid farewell to their beloved blockbuster TV series this month. But holding on to a taste of HBO's fantasy juggernaut - literally - could become big business for some.

Winemaker Thibault Bardet has made a red by following the descriptions in the original books by George R.R. Martin. He has attempted to create the drink that he believes the grapes of the saga's Dorne kingdom might produce.

Thibault, a huge fan of the series, followed the descriptions closely:

"We have in our Dornish wine a really intense colour. We wanted to make it, as in the book, 'dark as blood'.

"George R.R. Martin is a good and wine fan. He wrote a huge amount about them in his original books. So we came up with a fruity, strong wine. Full-bodied, but easy to drink.

"My biggest dream would be for the author to taste it and for me to say to him: 'There you go, based on what you wrote, here is what I imagined your wine to be like. What do you think? Did you imagine in the same way?'"

It may be the end of the record breaking TV series, but it leaves a legacy of captured imaginations and, thanks to its filming locations, stimulated economies from southern Spain to Iceland and beyond.