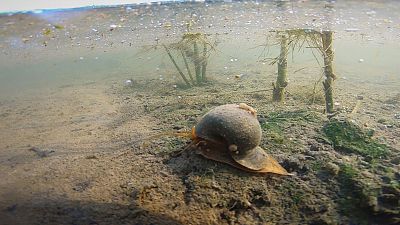 Slowly but surely, a creeping threat is destroying Spanish rice paddies. Global losses from the Apple snail are estimated at tens of billions of euros per year. Futuris takes a look at how scientists are tackling this problem in a simple and environmentally friendly way.

The boundless rice fields of the Ebro Delta: more than 90,000 tons of famous Catalan rice are grown here every year. Global demand is rising, but the threats are expanding as well: from the changing climate to pest infestations. How do we protect European rice from the creeping threat?

Brought from South America as a seemingly harmless mollusc to decorate aquariums, the South American Apple snail is now plaguing rice paddies, rivers and wetlands. They eat young rice plants, cutting the stem at the base. Each snail can destroy a square metre of field overnight — and with no local predators, they multiply fast.

"We need to slow down its spreading as much as possible. This is a plague that will be difficult to eradicate, that we must learn to live with, and we should use all possible means to prevent it from spreading," says the manager of the Cámara rice cooperative Miguel Ángel Vivas.

Researchers are working with farmers desperate to find a solution. Pesticides would harm shellfish, also produced in this area. But a safer snail-killing chemical is just nearby: sea water.

"Depending on the individual location, some approaches can be better than others. In certain areas it can be more economical, more efficient, more environmentally sustainable to use salt water, flooding the paddies with sea water," says Rice Agronomist at the Agrofood Technology Research Institute, Maria Del Mar Catalá Forner.

To tackle both problems, the salinisation of soils and the snail plague, biologists are working on salt-resistant rice.

"Here we have a cross between this Asian rice variety and an elite Spanish variety. We can see that the hybrid has coffee-brown coloured grains, ripe and ready to be processed. We’re trying to demonstrate a transfer of Asian salinity tolerance to the Spanish strains, so that they acquire the resistance while at the same time preserving the productivity that the Asian strain lacks," says Plant physiologist at the University of Barcelona Camilo López Cristoffanini.

In the university's experimental greenhouse, researchers from the European research project NEURICE are removing male parts of the rice flowers and then artificially pollinating the remaining female parts with pollen from another variety in order to produce a hybrid. No genetic technology here, just good old-fashioned cross-breeding.

The hybrid rice sprouts are then grown in salty water and thoroughly studied to make sure that they are sufficiently productive.

"What we see here is that some of our crosses between Asian and European varieties do indeed tolerate salinity. That makes them very interesting. The field tests should prove that they're preserving the productivity of European strains. And we can already see that they have inherited Asian salt tolerance, so they’re ready to face climate change," says Cristoffanini.

Parallel experiments in Spain, France and Italy should provide farmers in all these countries with optimal salt-resistant rice.

Back near the seashore, new rice varieties are grown in the test field. Researchers are using wireless sensors that constantly measure water salinity to ensure the results are accurate.

"The soil salinisation isn’t just a local problem here in the Ebro Delta, it’s affecting the whole Mediterranean region, all of Europe. In fact, it’s a global issue. And concerning the apple snail, the question for our project is not whether it will reach France or Italy — the question is when. Because if we do nothing, we can be certain that this will happen," says  NEURICE project manager and Plant biologist at the University of Barcelona, Xavier Serrat.