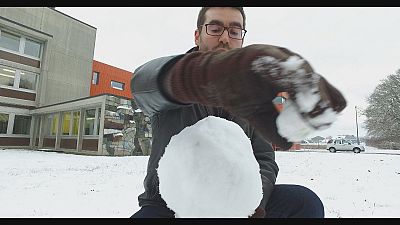 In this edition of Space, Euronews correspondent Jeremy Wilks reports from the Observatory of Geneva – home to experts in exoplanets, the name given to planets outside our solar system.

"An old dream of humanity is now a skyrocketing sector of science."

So far they have managed to find more than 3,500 exoplanets but they believe there could be literally billions of them across the Milky Way.

The first exoplanet to be discovered was what’s known as a hot Jupiter, a giant gas planet orbiting close to its star. That discovery, made by University of Geneva professor Michel Mayor in 1995, kick-started a revolution in astronomy, one which at the time of our interview put the number of exoplanets at 3,559 and counting.

“It’s amazing, it’s incredible that in 20-odd years we’ve gone from a dream – ‘Are there planets around other stars?’ – to the discovery of such a large number,” Mayor told Euronews.

Over the past two decades research has focused on hunting smaller planets, like our own.

“Nowadays people are excited about more specific things – finding habitable planets, rocky planets like Earth, at a distance from their star that means liquid water can exist there,” added Mayor.

The vast majority of exoplanets can’t be observed directly, because they are far too dim to see compared to the bright stars they orbit.

CHEOPS is an ESA space telescope currently being built and due for launch next year. In space it will be able to measure the radii of exoplanets with unprecedented precision.

That data will then be paired with ground observations from ESO’s (European Southern Observatory) VLT Telescope in Chile to seek out rocky planets like Earth.

In 2017 the VLT’s exoplanet hunting abilities will be boosted by a brand new instrument built at the observatory – a spectograph known as ESPRESSO.

December 19, 2017 –A new European planet-hunting telescope, the Characterising Exoplanets Satellite (CHEOPS) will be ready to launch by esa</a> <a href="https://t.co/xUrgzQ9BsK">pic.twitter.com/xUrgzQ9BsK</a></p>&mdash; CORICOSMOS (coricosmos) January 16, 2017

It is thanks to innovations like CHEOPS and ESPRESSO that the field of exoplanet research can expect to accelerate its rate of discovery even further.

So, will we find another planet like our own? Rocky, with liquid water and a breathable atmosphere?

“The dip that would be caused by the Earth transiting across the Sun is one hundredth of one percent,” Carole Haswell, Astrophysicist at The Open University, told Euronews. “So if you think about that, we need to measure the brightness of a star to a stability of one hundredth of one per cent over a time span of three years. So that’s not a trivial thing to do.”

Hunting those Earth-like exoplanets demands extreme precision, but the scientific rewards on offer mean the pioneers are now joined by scores of new researchers.

“That number didn’t get there by itself,” said Mayor, gesturing to the indicator of 3,559 exoplanets already identified. “It means that a lot of people are working in this field,” said Mayor. “An old dream of humanity is now a skyrocketing sector of science.”

From hot Jupiters to frozen ice-planets, it’s projected our Milky Way is home to over a billion exoplanets, with billions more across the universe. The hunt is on to find them.