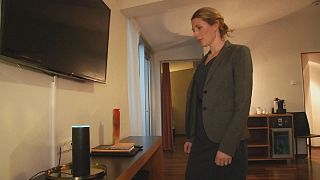 The time is nigh, humans and robotic systems can communicate.

After inspiring sci-tech movies like ‘Wargames and many before, the technology, which allows humans to ask for information and chat with a robotic system is now available and not just at a cinema near you.

The technology is voice-activated, you just have to say ‘Alexa’ before asking questions or making requests.

Thomas Djursing is the editor of Ingenioeren tech website:
“The voice recognition is one of the big drivers at the moment. And this in combination with neuro networks and artificial intelligence is making it possible to actually start speaking to the computers. We’ve been waiting for this to happen, but now it’s doable”

Guests’ questions can be answered directly by chatbot. Alexa can book taxis, play music, turn lights on and off and recommend restaurants

Thomas Djursing continues:“All of us are wishing for the big computer, the big thing that is going to answer all your questions. And that’s why I think these small technologies, like in hotels, like if you want to rent a bike or something like that, you can actually go and you don’t need to talk to a human being, you can get the small formalities done with an artificial intelligent robot.”

The hotel’s chatbot concierge is part of a wider trend in a link with the Internet of Things (IOT) devices. It’s an adapted from of a technology primarily intended to be used in homes.

The ultimate goal of the hi-tech market is a home where all devices ‘talk’ to each other.

According to US reseach 6.4 billion connected things will be in use worldwide this year, up 30 percent in comparison to 2015.