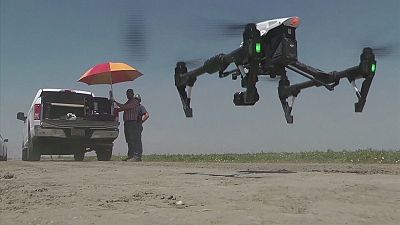 In drought-stricken California, every drop counts.

The drought's been a huge deal and it's driven us towards the efficiency angle just as much as we can. So we invest in these really expensive drip systems that save us 40 to 50 percent on the water that we used to use.

Farmers are constantly looking for new ways to efficiently use water resources. In Los Banos, some 120 miles southeast of San Francisco, farmers are turning to drones.

“The drought’s been a huge deal and it’s driven us towards the efficiency angle just as much as we can. So we invest in these really expensive drip systems that save us 40 to 50 percent on the water that we used to use,” explains Cannon Michael of the Bowles Farming Company.

“Now with this drone technology we can get right in there, we can make sure that the system is working properly, that we’re designing the systems properly and that we’re detecting any problems before they lead to water loss.”

The drone is equipped with a video camera, which is paired up with a smartphone or computer tablet. It flies over the fields, scanning them for cool, soggy spot where there might be a leak in the irrigation system.

Many farmers use infrared cameras to spot colour variations in the plants, which can signal a problem.

“Now, you can also fly in real time and see things like thermal differences within the canopy, learn where leaks are. It’s so new that we kind of don’t know all the potential of what there is. And it’s evolving so quickly that we’re just trying to get started and make sure we’re on the front edge of it,” says Cannon Michael.

California endured the driest four-year period on record before a relatively wet winter overflowed some reservoirs in the north. Southern California remains dry.

On farms around the world, the use of drones is becoming increasingly common as they become more affordable and easier to use. Other uses include tracking pest or disease, despite limitations from the Federal Aviation Administration.

On Cannon Michael’s 2,400-acre tomato crop alone, it’s estimated the leak-detecting drones could save enough water this year to sustain more than 500 families for an entire year.