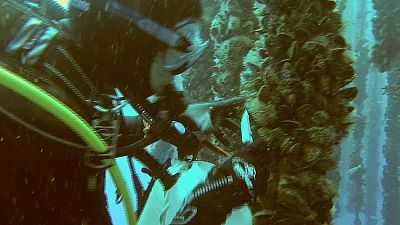 What if the secret of youth lies under the sea?

Marine biodiversity is rich in sources for medicine and cosmetic science, as Spanish researchers are discovering on the Mediterranean coast.

It’s a great day for a boat trip – and a good opportunity for marine biologists to collect samples for a European research project. They’re focusing on the Mesophotic zone, from 30-100m below sea level. It’s an uncharted area for many scientists.

Rafael Belda Poveda, biology research technician, iMare Natural:
“We’re looking for marine invertebrates. This is a mussel farm, and we’ll dive here to look for the species we need. Invertebrates have biomolecules that can be used in the fields of cosmetics, pharmacology and nutrition.”

Polyps, sponges and other invertebrates naturally produce toxins to defend themselves from predators. Scientists believe some of these compounds may be beneficial to humans – to delay skin ageing, kill cancer cells or heal other diseases.

Ana Esther Ortiz Maldonado, oceanographer, head of production, iMare Natural: “We’re starting with picking samples of small-size invertebrates, between 50 and 100 grams, to process in the lab. If that invertebrate produces interesting substances, it can then be cultivated and reproduced artificially, so there will be no need to harm natural populations.”

At their cultivation facilities, the oceanographers test environmentally friendly methods of growing invertebrates on-shore. But finding the most promising species for cultivation is the task of their research partners from other European countries.

Denis Loctier, euronews: “What are you going to do with the samples that we’ve collected?”

Ana Esther Ortiz Maldonado: “Now that we have the samples at our facilities we’re going to process them to be then sent to France where another part of the project team will conduct the biochemical extraction tests.”

These researchers have developed innovative tools to extract chemical compounds from invertebrates, and to cultivate symbiotic microorganisms that can produce anti-ageing molecules on an industrial scale.

Jamal Ouazzani: “We will insert special resins which will adsorb molecules of interest. So we don’t need liquid extraction, we’ll just remove these captured molecules with a little bit of solvent. This process is economical, ecological and, above all, effective.”

The collaborative project will continue for a few more years, looking for discoveries that will help us protect our health – while also protecting the sea.

Takeaway: the secret of youth