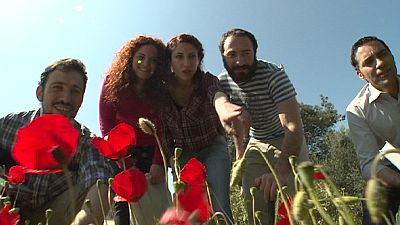 Most of the plants on our planet are still a mystery to science, to a large extent as the chemical composition of most species has never been fully analysed.

Scientists have been studying plants for many centuries, but there is still a lot to learn. In Athens, researchers are trying to unravel the mysterious properties of plants.

Almost 2,000 plant species have been collected worldwide as part of a European research project, from the South Pacific, Africa, Latin America, and in the Mediterranean.

Greece is the ideal location for such research, according to Nikolas Fokialakis, a researcher at the School of Pharmacy, University of Athens: “Greece, and especially its Mediterranean basin, is one of the global biodiversity hotspots. Lots of plants here are endemic and unique. So we collect plants to study them and to find any active ingredients they might contain.”

Researchers isolate individual compounds from plant extracts, looking for biologically active molecules that could be useful in cosmetics, as Dimitris Kletsas, a researcher in cell ageing at the Institute of Biology, NCSR, explained: “One of the causes of aging in skin cells is exposure to stresses – like UV radiation, for example.

‘If we can find compounds that protect cells from this radiation, enhancing the defence mechanism of the cells – that could be used for skin protection, or to prevent the premature ageing of the cells.”

In the past, researchers had to process kilos of plant material to isolate individual compounds. Now with new instruments all chemical substances in a plant can be ascertained with just a few grams of extract.

The project has obvious potential benefits.

“The important outcome of this research project is the library of bioactive compounds. Up to now we’ve studied biological activity for relevant cosmetics or agrochemical purposes, but in the future this library could be used for other aims, such as tests for diabetes, cancer or other diseases,” says Professor Leandros Skaltsounis at the University of Athens, School of Pharmacy, who is also AGROCOS project coordinator:

Plant extracts are mixtures of different molecules, some of which have already been studied, others which are new to science. Researchers store so-called ‘fingerprints’ of molecules in a database that enables them to focus on new discoveries.

So how will this research result in commercial innovations?

Euronews visited a cosmetics factory in Greece that uses plant extracts and other natural ingredients in all its products. It has joined forces with research centres and universities to create new formula using the findings of the study.

Molecular biologist Marianna Ralli is Scientific Affairs Manager of the KORRES project: “The characteristics we’re looking for in the extracts and compounds are three key qualities relevant to cosmetics: the antioxidant action, the whitening effect and the UV protection.”

Industrial companies will take over the research from the science bodies to find out how efficient new bio-active molecules are, and how best to integrate them into new products.

“Our goal is to learn as much as possible about what nature has to offer, to reveal the science in the living laboratory of nature,” says Marianna Ralli.

“With this research, we’ll find the five most promising plants, and then hopefully we’ll have very exciting news for consumers.”

There are more than 400,000 plant species on Earth, and only 20% of them have been fully studied. What secrets lie waiting to be discovered?..

Do you know: can we stop aging?