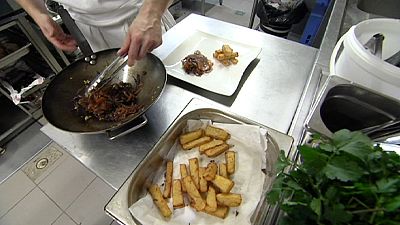 From the farm to the plate, what is really in our food? Despite some of the strictest food safety standards in the world, last year’s horse meat scandal raised serious questions at EU level about food supply chain controls.

For Gilles Pargneaux, a French Socialist MEP, the concerns run across the entire industry: ‘‘It’s not just a problem with meat, which is obviously under scrutiny, but you have the examples of road salt being transformed into table salt and you have tea leaves that are being used in all sorts of ways than they shouldn’t be.’‘

The horse meat discovered in products such as frozen lasagne last year was generally not found to be dangerous to public health, but the incident highlighted the complexity of Europe’s food supply chain.

In January this year a joint Interpol-Europol operation supported by the European Commission’s health directorate saw some 1,200 tonnes of fake food seized.

Police leading the investigation say the rise in this type of crime poses potentially serious dangers to public health.

Simone Di Meo of Interpol’s Illicit Goods and Counterfeiting unit outlines the problems the authorities face: “The supply chain is very vast so this can offer a very good opportunity for criminals to introduce their products, their sub-standard or fake products. Re-labelling for instance, or using even machinery to delete and put on the products new expiry dates.’‘

In a bid to allay consumer concerns Brussels is looking into new ways to fight food fraud. Tougher sentences for criminals pedalling adulterated products, more coordinated EU-wide testing and better labelling are just some of the measures being considered.

For the moment mandatory labelling in the EU showing exactly where most slaughtered animals have originally come from is still not on the table due to industry concerns over added costs, but may be, if MEPs eventually get their way.

Carl Schlyter rejects industry claims about massive increased costs: “It’s just myths. The reality shows on beef labelling, that it’s a minuscule cost. We should just do it and not just go for the industry propaganda.’‘

While yet to be approved, the EU’s new system of food labelling is due to come into effect at the end of the year.