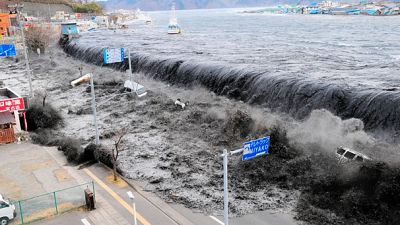 Massive waves crashed into the eastern coast of Japan after last week’s 8.9 earthquake. The tsunami killed thousands of people and left hundreds of thousands homeless.

Scientists in Europe are convinced this scenario could happen closer to home.

They have been working on an early warning system for countries surrounding the Mediterranean Sea.

The region along the Turkish coast in the Eastern Mediterranean is considered the most vulnerable.

Turkish geophysicist Ahmet Yalciner from the University of Ankara classed the risk as “very serious.”

He is the local coordinator of an European Union research project aimed at better understanding tsunami processes in the Euro-Mediterranean region.

He said: “The Turkish city of Fethiye is located near the fault zone in the Hellenic Arc. Hellenic Arc is a subduction zone, where the African Plate slides under the Aegean Plate. We have found that there are several similarities between this Hellenic Arc and the Sunda Arc near Sumatra, that caused the 2004 tsunami in South East Asia. We need to apply those similarities to this region. We need to understand the mechanisms that generate tsunamis”

Computer animation shows a tsunami after an underwater earthquake close to Fethiye.

Thirty teams from all over Europe have used the graphics to better develop strategies to protect people in the region.

That research is being coordinated from further down the coast, in Bologna, Italy.

Professor Stefano Tinti, a geophysicist from the University of Bologna, analyses all the data from the different control stations around Europe.

He and his team hope that their work will lead to the construction of an Early Warning System that, ideally, would let people know a tsunami was forming in just 20 minutes.

He said: “Tsunamis happened in the Mediterranean in the past, so they will happen again in the future. And today we have no way of protecting people from a tsunami. The only solution is to create a Tsunami Warning System in the Mediterranean, similar to the one that already exists in the Pacific and the one that is under construction in the Indian Ocean.”

Innovative algorithms and programmes have been developed to assess the risks for vulnerable European shores.

The aim is to help people to react faster in the case of an eventual catastrophe.

Stefano Tinti added: “We have developed comprehensive scenarios. Our simulations help us understand the main characteristics of the tsunamis. We can better understand the strength of the tsunami waves, so, for instance, we can predict if the buildings on the coasts will be able to resist them.

“We can also predict which are the best ways for people to escape. We can predict which buildings, bridges and so on would be flooded by the waves and which ones would not.”

To achieve this, international cooperation is vital.

Back in Fethiye geophysicist Ahmet Yalciner – a longtime collaborator with Stefano Tinti – is visiting one of the seismic stations, which overlooks the city and its harbour.

Here, seismometers constantly survey the situation, registering the slightest tremors. Low-level seismic activity is quite common in the region and that is why Fethiye and its surroundings are a perfect place for the TRANSFER project.

Ahmet Yalciner explained: “We are going to apply the model and understand the probabilities of tsunamis’ impacts. We are going to better understand the effects of local tsunamis both in Fethiye and in nearby Rhodes. We will also understand better the vulnerability of the buildings near the shoreline. And we are going to determine the hydrodynamic laws and their distribution along the shore line. And all this will help us draw flood maps”

From Fethiye the collected data is transmitted automatically to Istanbul, the bustling city on the Bosphorus that is the geophysical bridge that links Europe to Asia.

It also has a long history of earthquakes.

At the Kandilli observatory, Mustafa Erdik and his team gather earthquake data as part of another European project, SAFER. Researchers hope their work will lead to future early warning systems.

Mustafa Erdik said: “The main aim of the SAFER project is to capitalise on new developments in seismology; especially for the early warning and rapid response systems. We will also try to bring some standards and methodology and some permanent applications all over Europe, so it can be easily adapted by the public services, by the protection agencies and by the governments at large.”

But Erdik and most other experts on tsunamis and earthquakes say despite all the research they still cannot predict for sure if a catastrophe is going to happen.

Earthquake and tsunami science are still in their infancy.

He added: “For the last one billion years there have been earthquakes on the earth. But we have been watching them just for the last 100 years. And we are trying to predict what will take place. It is such a narrow time frame that it will be very difficult to make predictions for the future. And earthquakes and tsunami processes are chaotic. You can’t really put physical laws and mathematical models behind it.”

However, researchers agree that passing information to affected populations is vital to prevent dramatic situations from turning deadly.

Tragically the recent Japanese tsunami and the huge tsunami in South East Asia in 2004 confirmed the importance of transmitting information as soon as possible to exposed towns and villages.

Mr Yalciner explained: “We have an example in Simeulue Island, in Indonesia. In 2004, the epicentre of the earthquake was just 50 kilometres away from this island, where 80.000 people live. And yet only eight people died. The reason was that they had already experienced a tsunami in 1907. They had already understood that after an earthquake, the sea invades the shoreline. So if the people know basic things about tsunamis, they can easily evacuate themselves.”

Scientists hope their research will buy valuable minutes or even seconds for those who live along vulnerable coastlines if the worst does happen and the normally relatively peaceful Mediterranean is transformed by a giant underwater earthquake.