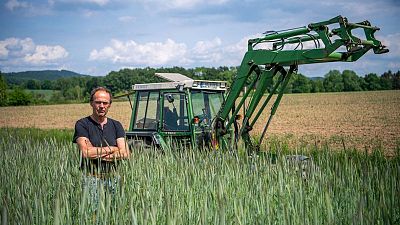 A farmer is taking Volkswagen to court over their contribution to climate change   -   Copyright  Lino Mirgeler/AP
By Tim Gallagher  with AP  •  Updated: 20/05/2022

A German farmer is suing Volkswagen over the damage climate change is doing to his family business.

Ulf Allhoff-Cramer’s case will be heard in the western town of Detmold and is backed by environmental NGO Greenpeace.

Why are Volkswagen being take to court?

Allhoff-Cramer claims that the automaker is partly responsible for the impact of global heating on the farming industry and wants Volkswagen to stop making combustion engines by 2030.

"Farmers are already being hit harder and faster by climate change than expected," says Allhoff-Cramer.

Greenpeace has already backed several legal cases in Germany aimed at holding companies and the government accountable for climate change.

Such cases have met with mixed success: some have been dismissed, while one made it to Germany's top court, which last year ordered the government to step up its efforts to reduce greenhouse gas emissions.

A similar demand to Allhoff-Cramer’s on Volkswagen - the world's second-biggest car manufacturer based on sales - was rejected by manufacturers last year.

Is Volkswagen a high carbon emitter?

The automobile industry is a high emitting sector, with a typical family sized car creating 24 tonnes of CO2 during its life cycle.

Volkswagen themselves claim that they have reduced the emissions of their EU fleet by one fifth compared with 2019. However, the company has been embroiled in scandals related to such claims before.

In 2015 the US Environmental Protection Agency caught Volkswagen using software that ensured diesel cars passed emissions tests and then turned off pollution controls during normal driving.

The company apologised and paid tens of billions of dollars in fines, recall costs and compensation to car owners.

How is Volkswagen responding to the court case?

Volkswagen said in a statement that it aims to reduce its emissions "as quickly as the business allows" but has set itself a 2050 deadline to cut carbon dioxide emissions to net-zero.

"Volkswagen stands for climate protection and rapid decarbonisation of the transport sector, but cannot meet this challenge alone," the company said, adding that the transformation also depends on government regulation, technological development and buyer behaviour.

"Disputes in civil courts through lawsuits against individual companies singled out for this purpose, on the other hand, are not the place or the means to do justice to this responsible task," VW said.

"We will defend this position and ask for the lawsuit to be dismissed."