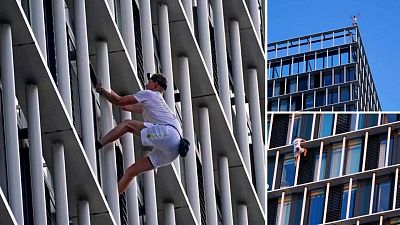 A free-climber who was jailed two years ago for climbing the UK’s tallest skyscraper, the Shard, has scaled yet another building in London.

So why did he make the dangerous ascent? George King-Thompson decided to climb a 36-storey tower in Stratford to raise awareness of climate change after severe flooding recently hit London.

"I wanted to raise awareness to the seriousness of climate change at the moment, because only a week before that, there was a heatwave throughout London," says George.

"I hope to raise awareness by climbing this building to urge political leaders to take action immediately."

The former personal trainer, 21, explains that he chose the building because he was shocked by flash floods that recently engulfed the area. Pudding Mill Lane, a tube station in Stratford, was one of eight stations closed because of flooding in July when almost a month's worth of rain fell in the capital city.

The climber said he spent a week preparing for the climb, studying every aspect and surface of the 147-metre building and trying to climb a few floors overnight in secret. It took him less than half an hour to reach the top during his ascent on Tuesday.

But there was one thing he wasn't prepared for.

"First eight floors, the windows were sticky. They had grip. But eight floors and above, they didn't. So, it's very slippery, which I underestimated," he says.

George admits climbing buildings is a risky exercise but stresses that he planned the climb so he would not be a danger to the public or cause disruptions. He also made clear that he was not encouraging people to climb buildings.

Police said they dispatched a helicopter to search the area Tuesday after they received a call that a man "was spotted at height" in Stratford. They said officers attended but did not locate the climber.

He was arrested after scaling the Shard in 2019 when the owners of the building pressed charges against him for trespassing, before being sentenced to six months in prison in October 2019 - serving three.

George’s free climb follows another extreme stunt in the name of climate change this week. On Tuesday, Reverend Tim Hewes sewed his lips together to protest against the “suppression” of climate science in Rupert Murdoch's media outlets.

Click on the video above to watch George's ascent in action.