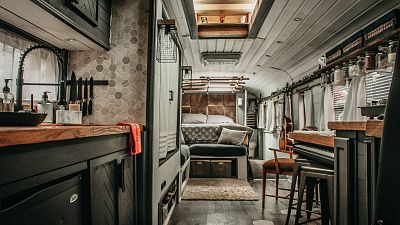 In early 2020, Architecture student Caleb Brackney bought an old school bus on Facebook and turned it into his home.

Brackney decided to turn his childhood holidays into his adult lifestyle by turning a bus into a tiny, mobile house. His aim was to gain first-hand experience on how to live more sustainably.

A post shared by BUSLIFE WITH CALEB BRACKNEY (@roamerbus)

"I definitely underestimated how long it would take to take everything out," says Caleb. He recalls that there were "over 1000 screws holding the bus together," many of which were covered in rust.

Caleb plans to live in the tiny house with his dog Ivy for the next few years while he finishes his studies at the University of Tennessee, Knoxville.

"I want to be able to provide a perfect case study. I have enough to be happy. I'm content and live a really great life," he says.