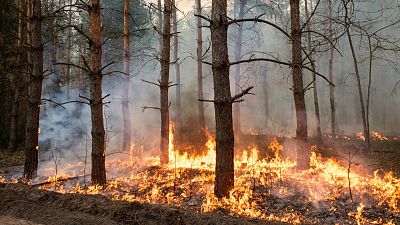 The UK could be the next country to fall victim to wildfires, according to a new study by Reading University.

Some areas of the UK may face extremely hot and dry conditions over the next century, increasing the risk of devastating wildfires. These conditions only occur every 50 to 100 years at the moment and are referred to as ‘exceptional danger’ days. But they could start cropping up every other year in a few decades’ time as a result of climate change.

Factors such as stronger wind, rising temperatures, lower humidity and reduced summer rainfall will play a role in the increased risk, as fire danger is affected by weather conditions.

Parts of eastern and southern England may be at the very highest danger level on nearly four days per year on average by 2080 with high emissions, the study reveals.

“In future decades, wildfires could pose as much of a threat to the UK as they currently do in the south of France or parts of Australia,” says Professor Nigel Arnell, the climate scientist at the University of Reading who led the research.

“This increased fire danger will threaten wildlife and the environment, as well as lives and property, yet it is currently underestimated as a threat in many parts of the UK.”

In a study published in the journal Environmental Research Letters, research shows that, excluding London, southern and eastern England are predicted to be worst affected.

The average number of danger days could more than quadruple, with up to 111 days in the South East and 121 days in the East of England on average.

What can we do to prevent wildfires?

Wildfires pose environmental, health and economic risks. Although the UK records tens of thousands of fires each year, these are nearly all very minor, in comparison to those in places like Australia and California, which have hotter, drier climates.

For the time being, experts recommend the following prevention methods which are essential to ensure wildlands, and those who live in and around them, are safe.

To address the potential of increased wildfires in the future head-on, the University of Reading is launching a SPECIAL research group as part of the Leverhulme Centre for Wildfire, Environment and Society.

Led by Professor and palaeoclimatologist Sandy Harrison, the aim is to tackle the threat of wildfires from a global perspective, to improve our ability to understand, predict and manage them.