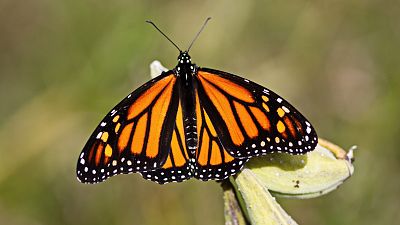 Populations of one of the most recognisable and well-studied butterflies are nearing collapse.

Scientists studying this year's migration of the Western Monarch recorded less than 2,000 butterflies, compared to the millions migrating in the 1980s.

According to the organisation that's a 99.9% fall from the number of monarchs in the 1980s when butterflies filled trees from Marin County to San Diego County.

This critically low number follows the previous 30,000-butterfly threshold recorded from 2018 to 2019—less than 1% of the population’s historic size, despite the volunteers visiting even more overwintering sites compared to the previous year.

The organisation says the decline is driven by the loss of overwintering, breeding, and migratory habitat in California, and pesticide use.

The species is also very sensitive to temperature and weather changes, so climate change can affect biological processes, like the ability to reproduce.

Despite the grim numbers, monarch butterflies are still not protected under the Endangered Species Act (ESA) that would prevent their habitat from being destroyed or degraded.

Last December, the former Trump administration called the monarch butterfly a “candidate” for designation but said that other species must take priority.

This could mean they receive protection in the future, but not for several years.

One of the most recognisable butterflies

Monarchs have orange wings laced with black lines and bordered with white dots. They are famous for their seasonal migration, during which time millions travel from the US and Canada to California and Mexico for the winter.

Some migrate up to 3,000 miles as, according to National Geographic, they have a special gene for highly efficient muscles which gives them an advantage for long-distance flight.

The Trump administration only added 25 species to the Endangered Species Act, in stark comparison to the Obama administration, which listed 360.

Conservationists are hopeful these actions will be overturned by the Biden administration but they admit this will take a lot of time and effort.

What can be done to help?

The Xerces Society along with other researchers and partners developed the Western Monarch Call to Action, that provide five key steps that if implemented quickly, can help recover the population in the short term:

Individuals can also do their part, according to the US Fish and Wildlife Service (FWS). It suggests gardening organically, planting local milkweed and other native nectar plants and educating other people about pollinators.

Why is preserving butterflies so important?

The iconic species is an important pollinator and should be protected at all costs, say experts. Public awareness campaigns exist in the US to encourage people to plant milkweed in their back gardens, and conservation projects exist all over the country.

We spoke to Dan Hoare, director of conservation at UK wildlife charity Butterfly Conservation, to find out more.

“At a time when the world is waking up to devastating declines of insects across the globe, weakening the legislation that protects them is a disaster that undermines urgently needed conservation efforts,” he tells Euronews Living, adding that the monarch butterfly “fully warrants protection under the endangered species act.”

“Recovering this species will require habitat restoration efforts at a continental scale and to reduce habitat loss, agricultural intensification and pesticide use that is driving this species towards extinction.”

According to the U.S. Fish and Wildlife Service's Great Lakes office, the species' status will continue to be reviewed annually.