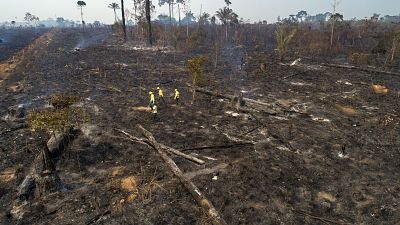 Experts say fires are pushing the world's largest rainforest toward a tipping point, after which it will cease to generate enough rainfall to sustain itself.   -   Copyright  Andre Penner/Copyright 2020 The Associated Press. All rights reserved.
By Rosie Frost  •  Updated: 18/09/2020

Eight European countries have urged Brazil to combat deforestation in the Amazon Rainforest.

In an open letter to Vice President Hamilton Mourão, the group which is led by Germany said that backwards moves in environmental protection were threatening Europe’s desire to source its food sustainably.

The letter was sent by the Amsterdam Declarations Partnership (ADP) which includes Germany, France, Denmark, Italy, Norway, the UK and the Netherlands. Belgium also signed the letter but is not a part of the partnership.

The Amsterdam Declarations were launched and signed in 2015 after the Paris Climate Agreement because 24 per cent of climate change was found to be being caused by changes in land use. The group’s aim is to provide Europe with products which are sustainable and free from deforestation.

The letter praised previous efforts but demanded “real action” and “firm political commitment” from the Brazillian Government to protect the Amazon and the Indigenous communities that live there in the future. It says that “deforestation has increased at alarming rates” over the last couple of years and concerns from European consumers, businesses and investors have been growing.

Mourão, who leads the country’s conservation efforts in the Amazon, told reporters outside his office that the letter was part of a trade strategy by European countries. The EU is in the process of finalising the EU-Mercosur trade deal which would allow free trade between Europe and a group of five South American countries.

Mourão said that Brazil would talk to the German ambassador and set up a meeting with the other countries that signed the letter if necessary, Reuters reports.

Fuelling deforestation in the Amazon

Just last week, Greenpeace unfolded a giant smoking banner on the headquarters of the European Commission in Brussels. The action was intended to draw attention to the EU’s contribution to deforestation in the region.

The European Union is responsible for 10 per cent of global deforestation and a recent report found that a fifth of soy and beef imported from Brazil came from illegally deforested land.

“The Amazon fires might be far away, but Europe has added fuel to the flames,” said Sini Eräjää, Greenpeace EU agriculture and forest campaigner.

“By buying meat, soy for animal feed and other products from deforested areas, Europe is complicit in the destruction of the Amazon and other ecosystems, driving climate breakdown and exposing us to dangerous diseases like Covid-19.”

Greenpeace is calling for the EU to bring in strong laws to ensure that nothing sold in Europe is fuelling the destruction of ecosystems or is linked to human rights abuses. The environmental campaign group also wants European governments to reject the EU-Mercosur trade deal which it believes would accelerate the destruction of the Amazon.