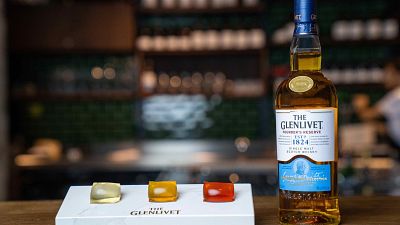 Posh whisky brand The Glenlivet has “ripped up the rule book” and ditched glass and bottles for a series of cocktails featuring its Founder’s Reserve scotch.

Instead, the cocktail pouches are encased in a bite-size seaweed-extract skin – made by Notpla, the same company that made capsules containing Lucozade for the London Marathon and other sporting events.

The capsules are 100% edible and degrade in less than six weeks if discarded – a rate Notpla says is faster than fruit peel. It means nothing wasted or even recycled, while saving water that would usually be used to wash up too.

Patrons can pop the 23ml capsule directly into their mouths, press it against their cheek and bite to release the measure. The sensation is said to be similar to that of popping a cherry tomato.

The Glenlivet is the first spirits brand in the world to team up with sustainable packaging start-up Notpla. The seaweed used grows at a speed of around a metre each day and contributes to de-acidifying oceans, said the brand.

However, the design has come in for ridicule on social media, with many comparing the “flavour explosion experience” of The Glenlivet’s cocktails to the Tide Pod Challenge, which swept social media in early 2018. The stunt dared people – usually teenagers – to record themselves attempting to eat a washing detergent capsule, resulting in a host of hospital admissions.

Meanwhile, others derided the pods suggesting that given the opportunity, many drinkers would attempt to ingest the cocktails via orifices other than their mouths.

Perhaps it’s for the best, in that case, that the limited edition range is only available until 13 October.