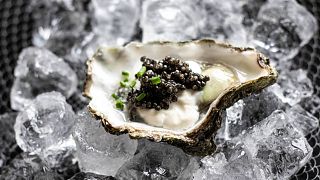 Black caviar was a delicacy already back in the days of Genghis Khan in the 1240’s. In the 1550’s, Francois Rabelais called it the finest pre-main-course treat out there. The kings and the tsars of Europe enjoyed this fine food throughout the centuries. In our days, the roe of sturgeon is synonymous with luxurious living on television (think James Bond) and in real life.

Obtaining the caviar, however, is inherently unsustainable: to get the fish eggs, female fish are hauled out of the waters shortly before they are meant to spawn and sliced open for their row, which results in their death. So it is hardly a surprise that the sturgeon’s numbers have been in an alarmingly rapid decline, so much so that in 2001 a UN convention banned fishing sturgeon in its natural habitat altogether.

The key words are “in its natural habitat”. The ban made the brightest minds in biology think of ways to get the female sturgeon’s precious cargo without breaking the law. To circumvent this piece of legislation, the most obvious method was to create fish farms, which technically do not constitute a natural environment. Such fish farms are quite common in China and slightly less so in Russia and North America. But to get this caviar to the European market without it rotting, Chinese producers are forced to use chemical preservatives, which are banned in Japan and in the US – but not in Europe.

If you’re a fan of the delicacy, here’s the good news: there is a handful of black caviar producers out there that are doing it sustainably – without killing the fish – thanks to a method whereby the eggs are “massaged” out right before spawning. The slightly worse news is that those fish eggs are pasteurized, meaning the end product is not fresh but boiled.

Luckily, one producer stands out in particular. Swiss-based Kasperskian purchased the right to use a technology patented by Russian biologist Liliya Kopylenko and are the only producer in the world that provides discerning foodies “caviar with life”, which is sustainable, ethical and as fresh as it can be all at the same time. The company was founded in 2014 by Nestle’s CEO Peter Brabeck-Letmathe and his long-time friend Konstantin Sidorov.

“Producing high quality black caviar in a sustainable way, without killing the fish, is extremely complex and costly. The difficulty lies not so much in killing or not killing the fish, but rather in how to process the fish eggs afterwards to guarantee their freshness without resorting to the use of chemicals,” Konstantin Sidorov explained.

Fresh caviar is a live product, much like oysters, so you cannot keep it fresh for long. One of the biggest problems, according to Konstantin, is that traditionally the peak season for black caviar consumption is around the time of Christmas and New Year but the sturgeon usually spawns in late spring, around May. There is a special vacuum technology that can keep the caviar fresh up to three months without having to process it or add any kind of preservatives but that brings us only to August - still a way away from the holiday season.

The patented technology used by Kasperskian at their fish farm allows for total control of the fish’s environment: what it eats (a factor that can really affect the quality of the roe), as well as the light and the temperature, meaning they can simulate late spring in September by increasing the water temperature and amount of light. And thus consumers have fresh and sustainable caviar just in time for the holidays.

“The pool we use is an incredibly complex structure so the costs of the technology and maintenance are very high, which reflects on the price of the end product. Quality product can’t be cheap by definition. And with wealth also comes a certain desire to consume consciously, which means that our customers are ready to spend more on a product that did not cost the fish its life. Unfortunately, in our day and age it’s easier to kill a life rather than save it so we feel a moral responsibility to show that that needn’t always be the case,” Konstantin clarified.

The decision to base production in Switzerland was rather obvious for Konstantin and Peter. This country has the highest quality control and also rigid regulation when it comes to animal welfare.

“Switzerland is the only place that bans boiling lobsters alive, for example. We receive weekly checks that are very serious and thorough. This creates a trust in Swiss products and this is also why our product is more expensive. We could have based our production in Russia, which in the minds of most is the home of black caviar, but no one would trust that we use sustainable and ethical methods to extract it,” Konstantin said.

In addition to the commitment to the fish’s welfare, Kasperskian aims to reduce its impact on the environment by producing its own electricity through solar panels and treating all waters to preserve the local wild fauna and flora.

Over the years, the caviar producer has made friends in high places and partnered up with esteemed brands such as LVMH, Dom Pérignon and Christie’s. Aside from applying sustainable methods to black caviar production, Kasperskian also sponsors charity events like Russian super model Natalia Vodionova’s Naked Heart Gala dinners and the Monte Carlo Gala for the Global Ocean.

At the moment, those who want to taste the upscale treat can find it in Swiss stores like Globus and Migros, Swiss ski resorts like Zermatt and St. Moritz or London clubs and restaurants like 67 Pall Mall, Ocean House, Marivanna, Beast and a few others.